Previously unavailable in English, Atlus Co, Ltd. localized the GameBoy Advance version and released it in North America on March 18, 2014 exclusive to iOS devices. However, potential players of this version should note that the virtual controls are very clunky and often unresponsive. The game may also not be compatible with later iOS versions. The Super Famicom version was fan-translated by the rom-hacking group Aeon Genesis on June 30, 2002. The script from the iOS version was ported to the Game Boy Advance Version by a romhacker named Gymzatan.

The story begins with a dream sequence as the nameless Protagonist is led through a formless hallway to meet a crucified man, a man tortured by demons, and a beautiful woman bathing who pledges to be with him eternally.

Upon waking, the story begins in Tokyo as the Protagonist checks his email to learn that a mysterious man calling himself Stephen has sent out a suspicious 'Demon Summoning Program' to all those willing to use it. Intrigued, the Protagonist downloads it onto his laptop before going out on an errand for his mother. Outside, it becomes apparent that all is not right with Tokyo - police have barricaded many streets and people have started to go missing, along with a recent murder in the park. It's soon realized that recent experiments with Terminal-based teleportation have accidentally opened up a portal to The Abyss, and demons have begun roaming the streets.

The Protagonist has another dream in which he meets the same dream-companions again, only this time they interrupt a ritual sacrifice in the dream. The woman who was to be sacrificed expresses her gratitude before the dream ends. Guided by the mysterious Stephen, the Protagonist uses the Demon-summoning program to convince some of the demons to join him and fight back against the more hostile demons. He soon meets up with the real-world versions of the men he met in his dream as they begin a search for some of the missing persons in the demon-infested Tokyo. Along the way, he meets a woman named Yuriko, who claims to be the woman he met in his dream and that she intends to fulfill her promise to always be with him as soon as she can sever his connection to 'the other one'.

The news of demonic invasion soon gets out, however, and the American military, led by Ambassador Thorman, declares martial law in Tokyo as they try to get rid of the demons. A reactionary Japanese militia force, led by Gotou, rallies against the cordoning imposed by the Americans and they begin working with the demons, whom they see as the ancient spirits of the land sent to create a utopia, to prevent the Americans from destroying Tokyo. A third resistance faction, led by the Heroine, seeks to keep the Americans and the reactionary Japanese forces from clashing and getting Tokyo caught in the middle. The party meets the Heroine, whom turns out to be the sacrificial woman from their collective dream. Despite their efforts, she is captured by Gotou's forces and Yuriko appears to personally oversee her public execution, claiming that once she is gone, Yuriko can be with the Protagonist eternally.

The Protagonist can choose to align himself with any of the three factions, but no matter what, the Heroine will be rescued and join his side, the two forces will clash, and Ambassador Thorman - the deity/demon Thor in disguise - will launch nuclear missiles on Tokyo, destroying nearly everything. The Protagonist, the Law Hero, and the Chaos Hero only survive thanks to the sacrifice of the Heroine, who sends them to the Diamond Realm, another plane of reality, with her magic.

After the Great Cataclysm

Upon their return from the Diamond Realm, they discover that 30 years have passed and that worldwide nuclear holocaust has occurred. Humans have survived, but the world has drastically changed, and demons roam freely. In Tokyo, particularly, two groups have risen from the remnants of the Martial Law forces and the Japanese Rebellion forces - the Messian Order and the Ring of Gaea.

The two factions are at odds with opposing ideologies. The Messians have aligned themselves with Law, choosing to devoutly follow the plans of their leaders to find salvation in 'God's Thousand-Year Kingdom'; finding the Gaeans as anarchists. The Gaeans aligned themselves with Chaos, shunning the Messian view as dictatorial, and choosing a path of anarchy where the strong make their own futures. The Messians have begun construction of a great Cathedral to be the throne of God from which he will purge the world of sinners, and the Gaeans seek to summon Lucifer from The Abyss to release strong demons across the world. Both sides have their followers and detractors, including the Law Hero and Chaos Hero, respectively.

In the future Tokyo, the Protagonist begins to feel the pains and hear the screams of a woman who apparently isn't there. After freeing a man known as the Psychodiver from a Gaean tyrant's prisons, the Protagonist is informed that his soul is inexorably intertwined with another's and it is her pain he feels. The Psychodiver tells him that the woman's mind has been infected by a demon, and if her condition worsens further, his own life will be in danger. The Protagonist finds the woman locked in a Messian stronghold. She bears an exact resemblance to the Heroine and she has been made to be the so-called Messiah of the Messian Church. With the Psychodiver's help, the Protagonist enters her mind and defeats the demon possessing her.

As the girl wakes up, she tells the Protagonist about vague memories of her former life. She was the Heroine who died saving him, but her soul was so strongly connected to him that she was reborn into the world without her memories of anything but the Protagonist. She leaves her life as the Messiah to travel with him and they are separated from the Chaos Hero and Law Hero. The Chaos Hero fuses himself with a demon out of his frustration to become stronger and leaves the Protagonist, deeming him 'weak'. The Law Hero sacrifices himself while protecting the Protagonist from a powerful demon who steals his soul.

The Chaos Hero finds his way into the Ring of Gaea while the Law Hero's soul is appropriated by the Messians and he is reborn as their Messiah. Both sides race towards the completion of their plans to summon Lucifer or God to bring salvation to humanity. Both sides try to convince the Protagonist to join their cause, and he can choose to join Echidna and serve Chaos, join Aniel and serve Law, or slay both to assert his allegiance to neither, depending on the player's choice.

Regardless of the player's choice, the Messian Cathedral is completed which summons a flood upon Tokyo, washing away everyone who wasn't in the Cathedral at the time. Only a few Messians and Gaeans remain alive in the Cathedral and they continue to try to eradicate the other. Again, the player has the choice of joining with the Law-aligned Messians, fighting against the demonic leaders of the Ring of Gaea; or to join the Chaos-aligned Gaeans and fight the tyrannical angelic Messian leaders.

After their initial clash, the Messians and the Gaeans find themselves locked in a stalemate, each side controlling half the Cathedral. The Asura Lord, leader of the Gaeans, has entrenched his forces in the basement of the Cathedral with his henchmen Arioch, Astaroth, Surtr, and finally the Chaos Hero. The upper floors are guarded by the angels Uriel, Gabriel, and Raphael, as well as the Law Hero standing before the angel Michael, the leader of the Messians. No matter his path, the Protagonist must fight his way across both lines to confront both Michael and Asura Lord.

After defeating Asura Lord at the behest of Law, Michael at the request of Chaos, or both to restore the balance, the Protagonist is teleported to the roof of the Cathedral above the clouds. A Chaos-aligned Protagonist is congratulated by Louis Cyphre, who reveals his true form as Lucifer and vows to lead the world into a golden age of freedom. On the Law path a messenger of God welcomes the Protagonist, and tasks him with preaching God's word so that all mankind may be welcomed into the Thousand-Year Kingdom. A Neutral Protagonist is greeted by the figure of Taishang Laojun, a being of balance, who thanks him for his efforts on behalf of the universe, and urges that the hero build a new future for mankind, "built by neither reliance on God nor demons, but by the hands of people themselves."

The Neutral path is considered canonical by later games. With the defeat of both Asura Lord and Michael, balance has been restored to the world and the Protagonist can work to create a world where the survivors can worship freely, which leads into the prologue of Shin Megami Tensei II.

All of the playable characters from Shin Megami Tensei are nameless, requiring players to insert names themselves. 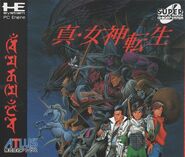 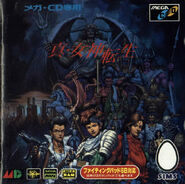 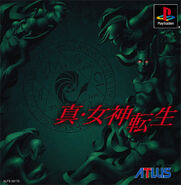 Art for the SegaCD Remake