Shin has a strong sense of justice and impulsive nature making him a poor match for Ryo's more cool-headed and enigmatic nature.

Shin Kanzato is the younger brother of Ryo Kanzato and older brother to Jun Kanzato. He is a second-year student at Naginomori High School. He always carries a pendant in the shape of a feather, which is a memento of his father. After his parents and little sister died, he and Jun spent time with relatives. The series picks up ten years after the incident that killed his parents when he returns to Ayanagi City with Jun. Immediately, he clashes with his older brother.

Inheriting his parents' artistic talents, Shin is adept at making clay models and sketching. Even before realizing his own Persona's power, he sketches and models most of the persona that appear in his dreams. After meeting Igor, he makes a model of him as well.

Within the series, it comes to light that Shin has been forced to forget his role in the events of ten years ago. After seeing his parents attacked by Ayane Komatsubara, he awakens to his Persona and ends up skewering them. Shaken to the point it is mistaken for Apathy Syndrome by some, Shin's condition forces Ryo to look into hypnotism to help him overcome the crippling guilt.

Anime Artwork of Shin hugging Yuki in his ideal world.

Artwork of the Kanzato Brothers. With Shin Hugging Jun

Anime Artwork of Shin and Kanaru.

Shin as a child 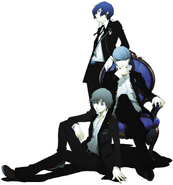