Shiki-Ouji is a demon in the series.

The shiki-ouji (式王子*)? is an exceptionally powerful type of shikigami that could only be summoned as a servant by the most elite of those that practiced the mystical arts of Yin and Yang. It could be used to scare away demons that cause sickness and to ward off disasters to its master. The shikiouji's basic nature is said to be very close to that of an oni and is thus very ferocious, making it very dangerous for average mystics to attempt to summon it.

They first appear during the Manikin massacre in random encounters in the Mifunashiro and Asakusa areas. Shiki-Ouji can also be found within the Mantra HQ and can be surmised to be a follower of Yosuga.

Summoned by Ogami at an altar in Camp Ichigaya after she sacrifices several Innocents.

Sid Davis summons Shiki-Ouji immediately after his battle with the protagonist in Kitayama University.

"A powerful creature often summoned by Japanese sorcerers called onmyoji.
They are used both to hurt and to heal, but their true nature is said to be very violent."
—Shin Megami Tensei V lore

A Shiki-Ouji in Nagatacho will request the help of the protagonist in the "Talisman Hunt" subquest. Three of its Shikigami Talismans have been blown upward into the mountains by the wind and it wants the protagonist to retrieve them. One has ended up in the one-way drop near the four Tsuchigumo in Toranomon, another has ended up on a roof just to the north of the two Tsuchigumo in West Shinbashi, and the final talisman can be found on the path to Onarimon in Shinbashi, along the path leaving Kamiyacho to the southeast. After returning to Shiki-Ouji, it will opt to prove its might in combat and engage the protagonist in battle. After the battle, it thanks the protagonist, able to tell that its power has returned, and it rewards the protagonist with the Brute Talisman.

Shiki-Ouji will later appear as an encounter during the raid on Jouin High School. The protagonist can avoid a confrontation with one by offering it a Life Stone. Afterward, Shiki-Ouji will appear as a normal enemy at Shinagawa Pier. They can be found walking normally as well as appearing as a floating blue talisman before they materialize and attack.

Should an Inugami be in the protagonist's stock, they may interject in a conversation and speak with Shiki-Ouji.

"A powerful shikigami that can be summoned by certain onmyodo. It can cause harm to others or cure illness, but its ordinary temperament is quite vicious."
—Devil Summoner: Soul Hackers 3DS compendium

Shiki-Ouji reappears a demon exclusive to the 3DS remake, available after Nemechi evolves into the leg form (female growth path), and costs 300 D-Souls. His artwork is based on his appearance from Shin Megami Tensei III: Nocturne.

"A powerful shikigami that can be summoned by certain omnyodo. It can cause harm to others or cure illness, but its ordinary temperament is quite vicious."
—Persona 4 compendium

"An exceptionally powerful shikigami. Only the most elite onmyoji are able to summon and bind it to paper. It can ward off disaster or cure illness, but its ordinary temperament is quite vicious."
—Persona 5 background

Shiki-Ouji is the fourth Persona of the Chariot Arcana and can be found as a Shadow in Madarame's Palace and the Chemdah area of Mementos, with the title "Bringer of Misfortune." When itemized through Electric Chair execution in the Velvet Room, Shiki-Ouji yields a Dormin Rush skill card. Shiki-Ouji is one of the Personas required for the advanced fusion recipe to summon Yoshitsune.

Shiki-Ouji first appears as a mid-boss in Madarame's Palace. Its strategy is very simple: inflict Rage on the party, shrug off their basic attacks with its physical immunity and exploit their lowered defense with Snap. The party should focus their offense using elemental or force skills and try to target its weakness to Nuclear skills. It will drop the Media skill card upon being defeated.

"A powerful shikigami of Izanagi-style, an ancient sect of Onmyoudou in what is now Kochi Prefecture.
In Izanagi-style prayer songs, a priestess named Amenaka-hime was apprenticed to the Indian god King Izanagi and began training in the ritual arts.
It is said that Shiki-Ouji spirits were bound into paper and could be used to protect against illness and inflict curses."
—Devil Survivor 2 Record Breaker compendium

Shiki-Ouji is summoned by the party on Thursday of the Triangulum Arc to aid them against Arcturus. Shiki-Ouji will only obey those he believes are worthy of being his Tayuu however, leading to a battle to determine the protagonist's worth. He creates three copies of himself to aid him in battle, with two teleporting to the other side of the party. Each Shiki-Ouji is joined by two Shikigami. During battle, if any one Shiki-Ouji party has Shikigami present, a Shikigami can sacrifice itself to resurrect a defeated Shiki-Ouji and its two Shikigami.

After the battle he accepts the protagonist as his Tayuu master. Yamato then takes Shiki-Ouji and harnesses his power for an app on the protagonists phone, allowing him to take damage from Arcturus' Plough of Death attack in place of his friends. The app only works on humans, however, and all demons will keep their weakness, likewise the protagonist cannot remove his own weakness. When Miyako Hotsuin joins the battle against Arcturus he can use the Soul Bind app again to take the damage she would take.

Defeating Shiki-Ouji unlocks him for fusion. He requires a special fusion of Take-Mikazuchi and Tenong Cut.

"A shikigami conjured by Onmyoji with the power to heal or inflict pain and suffering. It usually takes the form of a paper doll or animal, but can change its shape freely. Those who touch it will fall victim to its curse."
—Shin Megami Tensei: Liberation Dx2 compendium

Shiki-Ouji's artwork as it appears in Shin Megami Tensei: Liberation

Shiki-Ouji as it appears in Card Summoner

Shiki-Ouji as it appears in Shin Megami Tensei III: Nocturne

Shiki-Ouji as it appears in Shin Megami Tensei IMAGINE 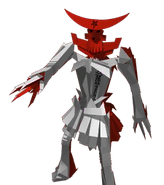 Shiki-Ouji as it appears in Persona Q: Shadow of the Labyrinth

Shiki-Ouji as it appears in Persona 5 Royal

Shiki-Ouji as it appears in Shin Megami Tensei: Liberation Dx2