Shiho Suzui is a supporting character in Persona 5. She is a student at Shujin Academy.

Shiho has brown eyes and black hair tied in a ponytail, held in place with a pink elastic band. Her bangs are parted to her left. She also wears two gray hairpins. Shiho wears her uniform without the black jacket nor the suspenders, thus donning a beige turtleneck sweater rolled up to her elbows, as well as the standard uniform skirt. Underneath her skirt, she has black athletic shorts, and beneath her shirt, she wears elbow braces. She also has a black knee brace on her right leg. She wears white running shoes with red designs, and white ankle socks.

In Royal, a cognitive copy of her appears in Kamoshida's Palace as a scantily clad playboy bunny, wearing a fluffy white bikini with matching wristbands and collar, a white rabbit tail and ears, with hot pink heels and a crown. When Shiho briefly returns in the third semester, she wears a dark purple jacket with coral trimming and white buttons, a large pink scarf, and a navy shirt with red and white stripes. She also wears cuffed, white shorts, black leggings, and black and white sneakers.

In the anime, she has dark brown hair. She is not shown with her hair down until the scene during which she wakes up from her coma, revealing that it reaches shoulder length.

Shiho at first glance seems to be a quiet and reserved girl who rarely talks to anyone and doesn't smile much. In fact, the only person she lights up around at school is Ann. She lacks confidence to a significant degree, thinking her volleyball skills are her only valuable attributes.

In reality, she is an extremely stressed and burdened teenager because she was one of the most frequent victims of Kamoshida's abuse, as he sexually harasses, beats and spikes volleyballs at her any time he sees fit. This escalated to a case where it was heavily implied that she was sexually assaulted by Kamoshida as a "consequence" for her friend Ann's rejection of his sexual advances, and this is the "final straw" that causes her to attempt suicide. However, it is said that she used to be an outgoing and sociable person until she received a series of advances, as well as abuse, from Kamoshida at Shujin Academy.

Ann calls Shiho an "idiot" out of lamentation for how Shiho allowed herself to be manipulated and driven to commit suicide by Kamoshida right after her attempted suicide, and further laments that she herself was an even larger idiot for having not noticed or taken action sooner, and refers to Shiho as a strong person for her endurance and perseverance through her situation, and her determination to move again in grueling physical therapy sessions.

Kamoshida's cognition of her appears as a scantly clad version of herself in playboy bunny outfit that acts as one of his obedient slaves to deliver his Gold Medal Spike. This indicates that just like Ann, Kamoshida didn't see her as anything other than a sexual object.

While unable to directly cooperate with the Phantom Thieves of Hearts, the suffering that Shiho experienced has eventually transformed into the foundation of their motivation to reform society and free it from the chains of corrupt people.

Shiho is Ann's best and only friend at Shujin Academy, due to the both of them being the "unpopular" and "outcast" girls of the school; as such, they can relate to and empathize with one another. Shiho didn't start out friendly however, as when she met Ann, the first thing she said to her was, "Takamaki-san, your paintings suck."[1]

She joined Kamoshida's volleyball club shortly before the start of the game, as she is an excellent volleyball player and has been playing since middle school. According to a few students in Shujin Academy, she was a lot happier and more outgoing before Kamoshida began frequently propositioning her for private training sessions. Afterwards, she suddenly suffers from a swollen knee, allegedly an injury sustained during the aforementioned sessions. In reality, it is heavily implied that Kamoshida physically abused her. She decided to keep this a secret out of fear of being expelled from the volleyball team. When first met by the protagonist, Shiho had bruises all over her face, presumably due to Kamoshida beating her during one of those "training sessions." After Ann refuses to accept Kamoshida's proposition to go to bed with him, she is called into his office by Yuuki Mishima. It is heavily implied that she was later sexually assaulted by him as revenge against Ann for rejecting his offer.

Feeling used and full of shame, Shiho attempts suicide by jumping off the school roof, yet survives the fall. Upon witnessing of the incident, Ann is horrified and nearly rendered speechless. Before she falls unconscious, Shiho reveals to Ann that Kamoshida was the motivation behind her attempted suicide. After she is hospitalized, her condition quickly worsens, and she slips into a coma. Shadow Kamoshida later reveals the implied sexual assault on her was due to Ann repeatedly rejecting his advances, "forcing" him to take out his frustrations on her only friend, sparking Ann's desire to get revenge on Kamoshida for what he had done. As a result, the protagonist, Ryuji Sakamoto, and Ann decide to form the Phantom Thieves to make Kamoshida confess to his own crimes by stealing the distorted desires in his heart, as no other student would dare go against him.

Following Kamoshida's defeat and confession, Ann reveals that Shiho has regained consciousness. However, she also sadly informs the protagonist and Ryuji that Shiho's mother has decided to transfer her daughter to another school, in hopes of distancing her from the trauma and gaining a fresh start. Ann tearfully accepts this turn of events, realizing that the rumors may not go away even after Kamoshida's admittance of wrongdoing. Ann worries about Shiho moving away, but ultimately realizes she will be okay as it would be the best path for her to take.

After the defeat of Yaldabaoth, the protagonist is sent to juvenile hall; Makoto is seen talking to Shiho, who is one of the people trying to get him out.

If the protagonist advances Ann's Confidant, Ann makes regular visits to Shiho, who is in the middle of physical therapy to recover her strength. Near the end of the Confidant, the protagonist and Ann help Shiho revisit the Shujin rooftop, where she walks near where she jumped. This helps Shiho conquer her fears and reconcile with her memories of the traumatic event. She explains that she was desperate to escape Kamoshida's influence; she did not really wish to die, but she heard a voice from within her that urged her to kill herself. She notes that, after she recovered, the other voice disappeared. Shiho vows to keep in touch with Ann and follow her friend's success as a model.

In the manga adaptation of the game, Shiho's role is near identical to her game counterpart. Among the major differences is the fact that Shiho is among the students Ryuji interrogates in regards to the rumors of Kamoshida's abuse. Prior to her fall from the school, she is shown talking to Kamoshida in his office. Here, he reveals his intent to remove Shiho from the team's starting roster due to her "poor performance." Horrified, Shiho begs him to reconsider; Kamoshida puts on a sinister grin, implying that this is when he sexually violates her.

Shiho now has a cognitive copy during the fight with Asmodeus/Shadow Kamoshida. She appears as a scantly clad version of her in playboy bunny outfit, and is summoned by Asmodeus to allow him cast his Killshot of Love. She can be killed and downed by any attack in order to interrupt the Killshot, although if one attacks Kamoshida for a total of around 300 damage, Kamoshida will drive her away.

When Tokyo is affected by Takuto Maruki's reality, she will plan on re-transferring to Shujin in the next school year and is now hanging out with Ann in the shopping districts at the station. Her personality also reverts to those prior to being abused by Kamoshida, and she is now a volleyball ace who constantly wins top scores for her team. Her reason for transferring school is also converted into her parents moving away instead of to cope with the abuse of Kamoshida (which did not happen in this reality). If one spends time walking around the underground mall during January 3 to January 8, they will see Shiho shopping for volleyball supplies alone, who looks forward to seeing the protagonist more. This is a result of Ann's desire to see Shiho fully rehabilitate and reunite with her. Once she chooses to deny Maruki's reality, Shiho is presumably no longer at Shujin as usual.

If the protagonist accepts any of Maruki's offers to overwrite the current reality with his, Shiho will be seen reading a magazine with Ann where she is featured as a volleyball ace.

Ann and Shiho after her failed suicide attempt

Ann and Shiho during Ann's Confidant 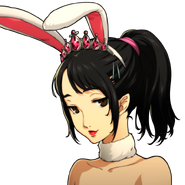 Shiho standing on the rooftop

Shiho injured on the ground

Shiho second from the left

Shiho after her failed suicide attempt

Shiho after waking up from her coma

Shiho in the P5A Artbook