Shibuya (渋谷) is a recurring location in the series. It is located in Tokyo, Japan.

The name "Shibuya" is also used to refer to the central business district of Shibuya Ward, which surrounds Shibuya Station, one of Tokyo's busiest railway stations. Shibuya is known as one of the fashion centers of Japan, particularly for young people, and as a major nightlife area.

Shibuya is located atop a plateau, which is accessible through a tunnel in Roppongi. Balam is the head of a cult in the city and has bewitched the residents into revering him. The protagonist can only battle him if his intelligence is 7 or higher. He drops the Moon Pillar upon defeat. An old man in the area will give the protagonist the Water Talisman after the heroine rubs his back. The Intelligence Building, a facility heavily guarded by robots, is located here, where the protagonist can play Devil Busters again and acquire the Devil Analyzer for his COMP upon completion. If the protagonist has received the Amitabha's Might from a priest in Ginza, he can gain the Kuchinawa Sword by circling around the Hachiko statue three times and then facing it. Doing so teleports him to a small island in the Expanse, where he finds Naga with a sword embedded in its back, pinning it to the ground. By helping the demon, the protagonist receives the Kuchinawa Sword and the option to recruit the Naga.

Shibuya is where the Mesiah Church keeps their "messiah", who has been possessed by a demon. The Hero and Law Hero dive into her mind with Soul Diver's help to save her, after which she joins the party.

After hearing about a bloody riot taking place at Yoyogi Park the protagonist decides to check it out. While trying to sneak into the closed park, he meets an occult magazine writer named Hijiri who talks about two opposing cults. After the Conception, Shibuya becomes a neutral city where demons and souls congregate. The Demi-fiend can meet Jack Frost here and also finds out that Chiaki Hayasaka survived the Conception.

Shibuya has been overrun with crystalline structures, which can be seen all over the ruins of the city. The crystals began forming with the appearance of the Obelisk at the city's center, not long after the construction of Shinjuku Babel.

Shibuya links to Shinjuku Babel to the north and Shinagawa to the south. Celu Tower is located in the southwest towards the exit to Shinagawa and Shibuya Quartz is found in the center in between the 901 and the Obelisk. The entrance to the subway is found further east of Quartz, where a statue of Hachiko and a special plasma that may contain a Blade of the Thunder God is located.

Like in Ichigaya and Nakano, Shibuya has several field bosses based on the Obelisk. Embodiment of Form boss variations of Angel, Baphomet and Artemis can be fought at certain coordinates. Baphomet also spawns several Bicorn along with it.

A special field boss, the Mad Avatar Raphael can be found in the central road to Shinagawa, east of Celu Tower. He comes accompanied with several Embodiment of Form Angels and Powers, as well as Deformed Powers. His appearance in Shibuya is announced as a booming voice resonates throughout the entire field. Should the player have accepted a certain quest from a Templar Knight in front of Arcadia in Shinagawa, defeating Raphael is required to complete it. Reporting the Mad Avatar Raphael's defeat back to the Templar Knight will grant the player Raphael's plug-in.

Found in the Roppongi Region, the city had been revamped by the Ashura-kai into the major meeting ground for demons wanting Red Pills. Special parties for them and guest humans are hosted at Club Milton until recently, where Koga Saburo has forced them to halt such activities. The underground district is larger than in other districts, being divided into several sections.

Flynn and his fellow Samurai enter Shibuya after being informed that Tayama would like to meet with them following the recovery of three allies from Kagome Tower. Upon arrival, they receive a transmission from Tayama on their Gauntlets. Tayama directs the Samurai to meet a contact at Club Milton, bargaining with the life of a fellow Samurai whom he had captured.

Meeting the contact at Club Milton, he reveals that the Ashura-kai wish to have Koga Saburo slain. Following the battle against Koga Saburo, the contact tells the Samurai that Tayama has agreed to meet with them at the Hills building in Roppongi.

Shibuya is the second location that Nanashi and company must battle Shesha.

Shibuya is one of first three traversable areas on Tokyo map at the beginning of the game. It is divided into multiple parts, and is where Munehisa Iwai's Untouchable airsoft shop, one of the Gigolo arcades, Toyo Cinemas movie theater, Protein Lovers gym, Scarlet video rental shop, Big Bang Burger, a diner, Wilton Hotel, one of the Velvet Room entrances, and more, are located.

Behind the scenes, Shibuya has been under control by Junya Kaneshiro who focuses on scamming high school students mainly in the back alley. Kaneshiro's Palace takes place in Shibuya. Soon thereafter, he has been neutralized by the Phantom Thieves.

When Mementos is fused with the real world, Shibuya turns into an apocalyptic wasteland, and it acts as the location for the Qliphoth World, the last dungeon in the game. 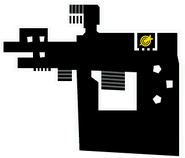 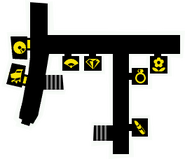 The specific region in Central Street of Shibuya is based around Hachikō-mae Square (ハチ公前広場, Hachikōmae hiroba)?, a popular meeting spot with a bronze statue honoring Hachikō (ハチ公広場*)?, the Japanese Akita dog famous for its loyalty to his owner, for whom he continued to wait for over nine years after their death at work.[1][2] It's referred to as "Buchiko" in-game. The protagonist can read a book titled Buchiko's Story, which boosts the Kindness stat.

Shibuya is also home to the well-known Shibuya Scramble Crossing, said to be the busiest in the world.[3]

One former landmark that appears in Persona 5 is the AOGAERU tourist office (青ガエル観光案内所, Ao-gaeru kankōan'naijo)?, the green train next to which Toranosuke Yoshida holds his speeches. However, the train has been moved out of Tokyo in 2020 as part of the Shibuya redevelopment project.[4][5] On August 6th, it was successfully transported to the Akita Dog Visitor Center in Ōdate.[6][7] It was temporarily opened as a resting place in November,[8][9] after which it was repainted and returned again on March 25th next year, planned to open to the public on April 8th.[10] In the original place of the green train, the tourist attraction center, the SHIBU HACHI BOX, has been opened on October 1st, 2020.[11]

In preparation for the Phantom Thieves' summer vacation, the protagonist, Morgana and Ryuji Sakamoto travel back to Shibuya for camping tools. There, they find out about an idol known as Alice Hiiragi hosting an event near Shibuya 705, who has abnormal popularity in Shibuya.

Shibuya is one of the locations that have a Jail, with Alice Hiiragi as its Monarch. Having the Shadows steal the hearts of its masses after luring them in the Shibuya Jail leads them to fall in fervor with her, and the Phantom Thieves decide to defeat her.

While previously existent in Persona 5, the Shibuya 705 store is now overlaid with the Shibuya Jail. Mass firing of employees who are not fans of Alice also occurred in the TOYO Cinema.

Shibuya is the location where the protagonist, Yuzu, and Atsuro meet on the Day Before and where they first use the altered COMPs received from Naoya. Upon activation, the Demon Summoning Program summons three demons that they must form a contract with.

Each day during the Tokyo Lockdown, the party returns here to sleep in a shelter at night. Shibuya is also the location of Miyashita Park, where the party discovers Mari is being stalked by the vampire Kudlak.

Shibuya is a central location in the game, as well as the location of several key story events such as a concert put on by the pop singer Kiria that is interrupted by the arrival of hostile Mirages. The Shibuya 106 Building (a fictional stand-in for the 109 Building) becomes the entrance one of the game's Idolaspheres, while another Idolasphere entrance opens in the Central City region of the map. Overall, Shibuya is the largest explorable overworld area in the game. Shibuya is also home to shops that the player's party can visit including Hee Ho Mart, Carabia Jewelry, and Cafe Seiren. Uzume Lesson Studio, a key story location, is visited to kick off each chapter. Certain sidestories in the game also require exploring Shibuya to find specific locations or items.

The protagonist with Ann and Ryuji

The protagonist walking in Shibuya Station

Morgana in the "Shibuya" Newsletter in Persona 5 Strikers