Laura Bailey
"Ahahahahah! C'mon, look! You can't tear your eyes away! This is me! This is who I really am! Not Risette, the fake celebrity! Look at the girl right in front of you! I'm sick of being some airhead cliche who chokes down everything she's fed and takes it all with a smile! "Risette"? Who the hell is she? There's no such person in this world! I'm no one but myself! C'mon look at me!"
—Shadow Rise

Shadow Rise is an enemy in Persona 4. It is the Shadow Self of Rise Kujikawa.

Shadow Rise was created from Rise Kujikawa's dark feelings about not being able to identify her "true self". This one-dimensional Shadow manifested itself as a pole dancer, threatening to completely expose herself in front of the party in order to get them to "look at her", much to Rise's dismay.

Rise denied the Shadow, and it became enraged, transforming into a technicolor monster dangling from a striptease pole with a fractal mirror as a face.

The party was unable to defeat the monster, as its Supreme Insight technique prevented them from landing any hits. The group came close to meeting their demise at the hands of this Shadow, but Teddie stepped in at the last second and defeated it by exerting all his energy, thus "deflating" him. The Shadow reverted to its more human state, where Rise accepted it. Shadow Rise transformed into Rise's Persona, Himiko, which was used almost immediately after its creation as Shadow Teddie surfaced.

Himiko inherits the fractal mirror face that the Shadow has, although the design of both are significantly different.

In the anime, Shadow Rise appears in Episode 10. She torments Rise by creating many duplicates of herself, each wearing a different outfit and representing an aspect of "Risette". In battle against the Investigation Team, her "Supreme Analysis" ability enables her to identify each of their Persona's elemental strengths and weaknesses, and she uses a pole-shaped cannon to bombard them with magic. For the final blow, she assembles multiple pole-cannons, only to be thwarted by Teddie.

The fight with Shadow Rise is one of the easier Shadow fights in the game, as it really only serves as a warm-up for the upcoming fight with a more daunting Shadow. The battle begins with the creature casting low-level magic spells at individual party members. The Shadow has no strengths or weaknesses, so any means of inflicting damage at this point will suffice. After about a third of Shadow Rise's HP has been depleted, she'll start using Mind Slice, which may cause confusion, but it shouldn't be much a problem. After two thirds of her HP is gone, Shadow Rise will use Supreme Insight. At this point, no attack can touch her, so it's best to either guard for the remainder of the battle or simply attack in vain. The battle ends after three turns have gone by with Supreme Insight in effect, and the party's HP and SP are automatically restored for the next battle.

If the player somehow manages to deplete all of Shadow Rise's HP quickly enough, Shadow Rise will not die, and simply transition to using Supreme Insight at her first opportunity. 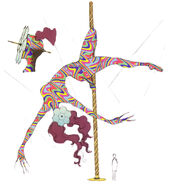 Shadow Rise in Persona 4 The Animation