Shade is a demon in the series.

Shades can be taken as the spirit or ghost of the dead that resides in the underworld. The idea of ghosts of the dead who live in the underworld is common in the myths of the ancient Near East, and in Biblical Hebrew, shade is expressed by the Hebrew term tsalmaveth, which literally means "death-shadow."

"Origin: Worldwide. A dark ghost that is called a shadow. It is a materialization of deep attachment to desire, causing fear in others. In order for it to continue existing, it absorbs the life of others."
—Shin Megami Tensei A-Mode DDS Dictionary

Shade is one of the four demons that Gotou summons before fighting the protagonist himself. 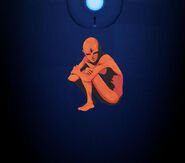 Shade as it appears in Shin Megami Tensei
Community content is available under CC-BY-SA unless otherwise noted.
Advertisement