Seven Sisters High School is a school considered to have very high standards in Sumaru City. It is the high school attended by Tatsuya Suou, Anna Yoshizaka, and Lisa Silverman. Several other important characters also attended the high school; Tatsuya Sudou was a senior, Katsuya Suou an alumnus, and Akinari Kashihara was the World History teacher.

The emblem of the school is based on the Pleiades constellation, which is also the school's namesake. Aside from the school uniforms, all clocks in the school as have the emblem in their faces.

The male uniform consists of a black jacket and pants with white strikes. The female uniform is a sailor suit with the same color motif. The male students wear ties while the female students wear ribbons in colors that indicate their grade: green for first-years, orange for second-years and blue for third-years. However, in the Tsumi to Batsu manga, the color representing second-years is red.

Sevens is the first dungeon of the game, as well as the gateway to the Silver River, which is the only way to get to Xibalba's core, the game's final dungeon. If, during the first visit, the player starts the rumor that Takashi Hanya is not dead, he will defend the school during the Last Battalion's assault, having been changed by the students' rumors into a great principal and man; however if the player says he died, the school will be defended by the returning cast from Megami Ibunroku Persona.

Sevens returns as the first dungeon of the game, with the short title as 7 Sisters or Sevens. The EX Dungeon is also based on the school's layout.

A hallway in SSHS 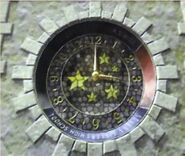 The clock on the central tower 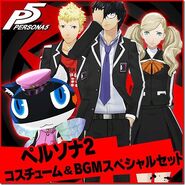