Setsu is a central figure in the main storyline quest for Shin Megami Tensei IMAGINE, first appearing when the player character gains their Demon Buster license and reports to Yamamoto the Steel-Willed. He introduces himself shortly after to ask the player to investigate a dungeon in Shibuya.

He is the third Innocent created by Kuzaka The Wise and although they are not blood-related, he regards Kuzaka as his father and Azura as his younger sister. Setsu demonstrates some concern over Azura, but will not let her interfere with his plans. After the accidental death of his older brother Abel, he took on his dying wish to unify the Innocents and supervise the revival of Tokyo. For this reason, he claims he's worked to the top of society and gained the trust of Yamamoto to do this. To follow his goals without the influence of the powers of Tokyo, he has contracted a number of Fallen Angels to do his work.

In act 19, he transforms into Seth and fights the player. While Setsu is invulnerable in the first fight, by gaining additional power from their alignment leaders, the player defeats him in act 20.

In the Basilica activation quest, an older-looking Setsu appears before players, coming from a parallel world through the use of the Ten Commandments Gem, an item that previously appeared during the third chapter of acts in the main storyline. In the End of Days Ichigaya instance, he joins the player as NPC support along with Azura and DB Kuroe.

After completing a series of quests for him, it is possible to challenge him to a one-on-one match. He uses mostly physical-type Almighty moves and summons Forneus, Decarabia and Eligor as his demon support. Unlike Kuroe and Azura whose demon partners are linked by fate, his demon supports are at the looking to betray level of Friendship. By his resistances during this fight, he is shown to be using Seth through digitalize.

Setsu as he appears in game 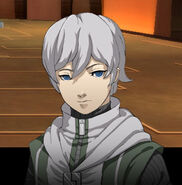 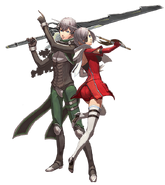 Setsu and Azura from a parallel world 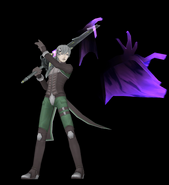