Ren Amamiya (P5 Anime)
"You are not the one... who is to judge. I cannot forgive... one of contrary existence."
—Seth, Digital Devil Saga: Avatar Tuner 2

Seth is a demon in the series.

Set, also spelled Seth, Sutekh or Sūtaḫ, is a deity from Egyptian mythology. Set is the deity of deserts, storms and chaos and served as one of the greatest deities in Egyptian myth. Set was married to the goddess Nephthys, who was also his sister. He killed and dismembered his brother Osiris out of jealousy. Isis, Osiris' wife and sister, reassembled him and Osiris became the ruler of the dead. Isis gave birth to Osiris's child, Horus, who became an enemy of Set. In earlier myths, Set fought Apep each night as Ra journeyed through the underworld. Set had been demonized to some extent, and the Greeks interpreted him to be a force of evil, which may be one of the reasons he is viewed as an antagonistic force in later depictions.

Seth was one of the earliest major Egyptian deities to be demonized. Already associated with the uncertainties and hardships of the open desert, he had a bad, but not ignoble reputation. Due to Set's ties with his mortal enemy Apep, the two became ironically intertwined. Because of this, especially in the western world, conceptions of Set began to take on the serpentine features of Apep. This is further confounded by the inability of archeologists to identify a specific animal-form to Set, so instead the label "Typhonic" was adopted, like-Typhon of Greek mythology, which is to say of many forms, primeval, and generically serpentine. It is not impossible to see how it was Set became likened to serpents, even while no such relationship exists. It is even possible because Set's animal-head often adorns staves, the long slender snake-like shape of a staff was attributed to Set, such as when Moses transmutes a staff into a snake in the Old Testament. And even in modern times images of Set have been probably more influenced by the fictional demi-god 'Set' of Father Set Conan fame than any actual representation of Set.

All of this comes to a head in the second Digital Devil Story novel which features Set, Typhon and Apeps (plural), and in league with one another. Moreover, Seth's final form in the novel is a giant snake.

Set only appears briefly at the end of Digital Devil Story: Megami Tensei. Ohara accidentally summons him while attempting to contact Loki. He is insulted that he was summoned yet Ohara was calling for Loki instead. Set's appearance is mostly foreshadowing of his role in the second book as one of the main antagonists.

Set is revived by Lucifer and serves as one of his servants. He governs the Sea of Flames, the second-to-last dungeon. He can only be reached if Nakajima has obtained Ruth's Bottle; if Purski's Neigh has also been obtained, it will occasionally stun him, keeping him from taking his turn during the battle. When defeated, he drops the Lion Shield, the strongest shield in the game.

Seth acts as the final boss of the main episode's storyline where Setsu transforms into him during Act 19. The first encounter is designed to fail with either the player running out of time or dying. Players are then given a ring to boost their damage against him by the leader of their respective alignment. The final fight against him within the main story is a timed encounter.

After completing Side A of the extra chapter, players are able to follow the Side B quest where they are brought back to the place of their first encounter with Seth to fight an even stronger form. This battle against Seth takes place in a void above the earth, surrounded by stars and meteorites and is comprised of three different forms, ending with a timed fight against its final form. In this instance, Seth can use a variety of ailments that can drastically reduce a player's HP and MP depending on their actions in the fight, such as using attacks of a movement type he's disabled or not defeating mobs he's summoned within a window of time. Players are able to cure this ailment with the Purski's Neigh consumable, acquired by giving a Purski crystal to the Slime NPC in Second Home. By defeating Seth, players are able to obtain items to acquire his plug-in. He is a triple fusion of the three alignment act bosses leading up to his fight: Chimera, Isis and Gabriel.

Seth also appears as one of the four bosses governing the Abyss Tower instance accessed through the alternate Shinjuku Babel. This variation of him can inflict his special ailments through his unique attack, Megido Fire. The battlefield where he is fought is a wide expanse of sand with a pyramid in the background. His minions in this instance are Anubis and Sphinx.

"The Egyptian god of the desert, chaos, and evil.
He murdered his brother Osiris and tried to become chief god, but was castrated by Osiris' son, Horus."
—Shin Megami Tensei: Strange Journey compendium

Seth is a demon that can only be fused after beating it in battle. And it only appears when the protagonist has access to Enemy Search C.

In addition to this, there is a string of EX Missions "The wise man's library," initiated by a Thoth in Sector Eridanus. Completing each EX Mission grants the protagonist a passage that has a series of letters on it, and arranging all five in the proper order will produce a password that creates a custom Seth. This Seth, while at a lower level than its base, also has higher stats, on top of Agidyne, Bufudyne, Ziodyne, Garudyne and Concentrate.

Seth appears in the Challenge Quest, Isis' Search for the Coffin. He steals Osiris' coffin and tosses it into the waters, which brings it to Naraku. He attempts to stop Flynn from delivering the Sarcophagus to Isis and respawns even if he is defeated. He is level 45 when encountered during this quest, with the Madness Nails and Maziodyne skills at his disposal. If Flynn is hit with a full round of either, he will drop the sarcophagus and the battle will end, requiring him to go back to the 4th stratum of Naraku to recover it. Demons which are strong against or block Electricity will make him lose turns, along with casting Sukukaja to raise the party's evasion rates and make him miss.

He is able to stop Isis from resurrecting Osiris before the Challenge Quest Osiris Resurrection by stealing Osiris body and tearing it apart and scattering it across the desert areas of Tokyo. He attempts one more futile battle against Flynn after he retrieves Osiris parts to prevent Osiris Resurrection, but is defeated.

Seth appears as a boss in the Cosmic Egg third floor, claiming that he will have his revenge for being dismissed by God.

Seth returns as a Persona of the Moon Arcana. He can be summoned once the protagonist reaches Lv. 68 or above. Alternatively, the Persona Seth can also be obtained via Shuffle Time in Magatsu Mandala.

"The Egyptian god of the desert, chaos, and evil. He murdered his brother, Osiris, and tried to become chief god, but he was castrated by Osiris's son, Horus."
—Persona 5 background

Seth is the fourth Persona of the Tower Arcana and can only be obtained through advanced fusion in the Velvet Room. He is the first Persona usable by the protagonist to learn One-Shot Kill, Cripple and Fortify Spirit. He is also one of the three sources for the Fire Break skill. When itemized through Electric Chair execution, Seth yields a One-Shot Kill skill card.

The ability to fuse Seth is unlocked at Rank 1 of the Strength Confidant, which can be started by talking to the twins starting on 5/18. The task they give the protagonist is to show them a Jack Frost with Mabufu, which he learns at level 12.

The only other source of High Counter skill cards is through negotiation with Kali in the Qliphoth World. However, by that point, the Strength Confidant will no longer be available. Skill Cards do carry over to a New Game+, though, making it easier to fuse the required Seth on the next playthrough.

In addition to the above methods, a High Counter skill card can now also be obtained by itemizing Ose during a Fusion alarm.

Itemizing Seth now yields the Triple Shot Belt accessory, which grants use of the Triple Down Gun skill. During a Fusion alarm, Seth will instead become the Special Shot Belt, which bestows the One-Shot Kill Gun skill to the user.

Seth is a Persona used by Ren Amamiya to finish off Leviathan.

Seth is sent by Moloch to assassinate Masaki Kuzuha.

"A demon with a long beak that is best-suited for picking the bones of a fallen enemy."
—Demonary, DemiKids

"YOU WHO FIGHT AGAINST FATE...WHY DO YOU CHOOSE TO WALK THE PATH OF THORNS...?"
—Seth, during the middle of his optional battle

Seth appears as an optional boss who can be fought in the 5th Layer of the Sun. In order to challenge Seth, the Pinaka and Nandaka must be charged by the defeat of Shiva and Vishnu respectively. Afterward, they will unlock the door leading into Seth's area. Seth's views differ from those of Vishnu, as Seth states that evil, war, and fury are the ways of the world.

Seth is weak to Gun damage, so using one character to deal damage and the other two to heal is a viable strategy while facing them. Equipping them with the Pandemonium rounds, MIN Critical (or MAX Critical), and the Dual Ring will maximize their damage output. During the battle, Seth will primarily use the Pain skill to attack individual members. They also possess a special move, Desert Wind, that will knock a character out of the battle and set their HP down to 150. When Seth gets low on HP, he will also start using the Debilitate, Ragnarok and Vanity skills.

After the battle, the Root of Evil Mantra is unlocked at the terminals. As Seth's solar data disperses, the party receives the Avoid Ring, which will end the enemy's turn if an enemy's attack is voided or misses.

Seth appears as one of the downloadable demons in the game. He can only be fused using Osiris and Anubis.

"The Egyptian god of evil, the desert, lightning and storms. He murdered his brother Osiris and tried to become chief of the gods, but was soon overthrown by Osiris' son, Horus. Seth moved on to be worshipped by more accepting people away from the Nile River."
—Shin Megami Tensei: Liberation Dx2 compendium

Artwork from Digital Devil Story 2: Warrior of the Demon City 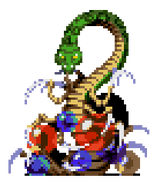 Seth as he appears in Persona Q: Shadow of the Labyrinth

Retrieved from "https://megamitensei.fandom.com/wiki/Seth_(demon)?oldid=394626"
Community content is available under CC-BY-SA unless otherwise noted.