Senri is a demon in the series.

Senri, also known as Xian Li, are said to be old leopard cats that have gained divine powers in Chinese mythology. They can take the form of attractive men or women and drain the spirits of humans. The Japanese Nekomata is thought to come from tales of Senri.

"Origin: China. A mountain cat youkai and powerful Nekomata. Like Senko, they have lived long lives, strengthening their powers. They, too, take on the form of women and drain men's energy to enhance their own power."
—Shin Megami Tensei A-Mode DDS dictionary

"A Japanese monster born from a lynx. It absorbs spirits from men by transforming into a beautiful woman. It is said that other monsters collect spirits to become a Senri."
—Shin Megami Tensei III: Nocturne compendium

Senri can be obtained through evolving Nekomata.

"In Japanese folklore, the senri are creatures that come into being when an extremely old mountain cat undergoes a spiritual transformation. It can take the form of a beautiful young lady and seduce unfortunate men that wonder into the mountains. It then steals their life energy in order to sustain itself and gain more power. The senri is the highest rank of bakeneko, and it is said that other animals that have become demonized gather life energy so that they themselves can become Senri. The senri are akin to the Chinese spirit animals known as the yao jing, which achieve human form after many years of training in the art of Taoism. "
—Shin Megami Tensei IMAGINE compendium

Senri can be contracted with in Nakano Stone Site's silver level instance. It also appears in support of Byakko when he acts as a boss in Shinagawa's Catacombs of the Templar Knights instance.

"A spirit born of a long-lived wildcat. It disguises itself as a beautiful woman to steal the vitality of men. Some say other demon animals collect vitality in order to become Senri themselves."
—Shin Megami Tensei: Strange Journey compendium

Senri can be encountered in Ikebukuro. They can also evolve from Kabuso once it reaches level 23. Senri can teach Flynn the Recarm, Zanma and Mazanma skills through her Demon Whisper. Upon reaching level 32, Senri can evolve into Nekomata.

Senri appears in the northern areas of the Fairy Forest, past the central gate and can also be found in Kasumigaseki. Kabuso will also evolve into Senri at level 21. Senri can pass on the Makakaja, Zanma and Recarm skills during Demon Whisper. Senri is also capable of transforming into Nekomata at level 31. Senri receives a bonus to any learned Force, healing and support skills learned. 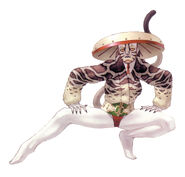