Senko is a term referring to a specific rank of kitsune. Senko means divine fox. Stories depict them as intelligent beings and as possessing magical abilities that increase with their age and wisdom. Foremost among these is the ability to assume human form. While some folktales speak of kitsune employing this ability to trick others, as foxes in folklore often do, other stories portray them as faithful guardians, friends, lovers and wives.

Foxes and human beings lived in close proximity in ancient Japan; this companionship gave rise to legends about the creatures. Kitsune have become closely associated with Inari, a Shinto kami or spirit, and serve as his messengers. This role has reinforced the fox's supernatural significance. The more tails a kitsune has (they may have as many as nine), the older, wiser and more powerful it is. Because of their potential power and influence, some people make offerings to them as to a deity.

"Origin: China/Japan. A fox with wizard-like powers. It is a fairy of the east whose power has grown immeasurably over the years. They can turn into beautiful women who feed by draining men's life energy. The most famous of them is the nine-tailed fox called Tamamo-no-Mae. It's said that Tamamo was defeated at Nasuno in the end."
—Shin Megami Tensei A-Mode DDS dictionary

Appears as both Senko and Tenko (テンコ*)?. 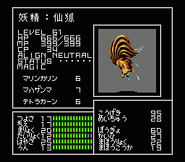 Senko as it appears in Last Bible II

Senko as it appears in Last Bible Special
Community content is available under CC-BY-SA unless otherwise noted.
Advertisement