Seiryu, also known as Qing Long or Long, is a demon in the series.

The Qing Long, also known as Azure Dragon of the East or simply the Azure Dragon is one of the Four Symbols of the Chinese Constellation (Si Xiang) along with Xuan Wu, Zhu Que and Bai Hu. He is also one of the dragon gods who represent the mount or chthonic forces of the Five Forms of the Highest Deity in Chinese cosmology.

It represents the East, spring, the color azure (green/blue) and the wood element. It is sometimes called the Azure Dragon of the East and is also known as as Seiryu in Japanese, Cheongnyong in Korean and Thanh Long in Vietnamese. He has also been known as Blue-green Dragon, Green Dragon or the Blue Dragon.

The dragon is frequently referred to in the media or other cultures, and in various venues as the Green Dragon and the Avalon Dragon. His cardinal direction's epithet is "Bluegreen Dragon of the East." In Japan, it is one of the four guardian spirits of cities and protects Kyoto. In Korea, the murals of the Goguryeo tombs found at Uhyon-ni in South Pyongan province features the Azure Dragon and the other mythological creatures of the four symbols.

In MTII, if the protgonist possesses the Heidrun, from trading a Member's Card, and the Fallen Angel Wing, after doing the Jack Frost Jr. trick, the next time the Cathedral of Shadows is entered, Jack Frost Sr. will offer the protagonist a Qing Long, Bai Long and Kali to add to his team, regardless of level.

Known as Long, he can be obtained by leveling a Mizuchi to level 40 or until it evolves.

In Shin Megami Tensei III Nocturne HD Remaster its name has been changed to Qing Long.

Qing Long appears as a field boss within Ueno's Kuchinawa Cave area and as a final boss of the medium difficulty ranking for Hongou field. To obtain his plug-in, players must defeat the illusion that appears in Kuchinawa Cave at exactly 3:00 or 15:00 in-game time. If done correctly, a much stronger version of the boss will appear somewhere within the cave. By defeating it, players obtain the item necessary for his fusion. He is a triple fusion of Jikokuten, Quetzalcoatl and Gandharva.

Known as Long, he is an optional boss in the Challenge Quest, Slaying the Dragon of the Lake. Found at Lake Mikado near Mikado Castle, he asks if Flynn has come to slay him. Answering yes has him attack and call him a fool for thinking he can slay him. He asks Flynn if he believes dragons to be "Enemies to be slain for honor and glory," or as gods of the land. Telling Long that dragons are just beasts to be slain shifts Flynn towards Law, while believing that dragons are holy spirits shifts him towards Chaos. After defeating it, the dragon admits to underestimating him and is surprised by his great power. He decides to leave the Lake after the battle.

Purchasing the Mikado Wood upper body armor will grant Flynn a resistance to Force attacks during the battle. Fortuna will also absorb Long's Force skills and may be fused with a special fusion of Napaea, Dwarf and Melchom. Sandman, who drains Force, can also prove to be a useful ally.

"One of the Ssu-Ling, celestial creatures in Chinese lore.
It represents the direction east, the season of spring, and the element of wood. It is the noblest of the Ssu-Ling and dwells in a palace at the bottom of the ocean. In Feng Shui, placing water in the east side guides its power and is said to bring good fortune."
—Shin Megami Tensei IV Apocalypse compendium

Long can teach Nanashi the Zandyne and Acid Breath skills through its Demon Whisper. It benefits from learning Force and support skills.

"One of the Ssu-Ling, celestial creatures in Chinese mythology.
It represents the east, the season of spring, and the element of wood. It is the noblest of the Ssu-Ling and dwells in a palace at the bottom of the ocean. In Feng Shui, placing water to the east is known to guide its power, and is said to bring good fortune."
—Shin Megami Tensei V lore

Qing Long is one of the gods that the protagonist must face during the subquest, "The Gold Dragon's Arrival." It will appear patrolling the eastern edge of Hamamatsucho, near Seth's flight path. Qing Long is quite powerful upon taking the quest as soon as it becomes available, and at Lv.45, the protagonist and his party may not be able to defeat him.

A Seiryu is necessary in order to fuse Zeed into the general Lanling Wang.

The third demon that must be defeated during the Ritual of Unsealing, he is found in Dark Ginza-Cho. In battle, he is joined by pretas and uses the unique boss attack Terror Blizzard.

Seiryu, along with the other Ssu-Ling (Genbu, Suzaku and Byakko), are fused in a cross fusion in order to create the ultimate Persona of the Hierophant Arcana, Kohryu, the Gold Dragon.

Once again, Seiryu can be fused in a Cross Fusion with the other Ssu-Ling to create Kohryu.

"The noblest of the Ssu-Ling creatures of Chinese myth. It represents the direction east, the season of spring, and the element of wood. He dwells in a palace at the bottom of the ocean."
—Persona 5 background

Seiryu is the ninth Persona of the Temperance Arcana and can only be obtained through fusion in the Velvet Room. He is the first of two Personas to learn the Repel Nuke skill. When itemized through Electric Chair execution, Seiryu yields an Amrita Drop skill card. Seiryu is required for the advanced fusion recipe to summon Kohryu, along with Genbu, Suzaku and Byakko.

Seiryu is instead the sixth Persona of the Councillor Arcana.

Known as Seryu and Seryuzom, he must first be resurrected as a zombie and then fused with his soul gem to be reborn as Seryu. Seryu has the power Battle Rage, which makes him go berserk against mean foes. Seryuzom can be revived through Relic Fusion using the combos Blood-Slim-Wing, Lion-Fist-Slim or Lion-Dino-Wing. Seryu can perform the combo Freeze Wave with Icy Ace or Warbolt and King Freeze with King Icy.

After defeating Ananta in the final floors of the Karma Temple, the Embryon can come down from the tower and find out that four powerful demons have taken over several sectors of the Junkyard. Long appears in Ajna, in the piano room in the red configuration. The Asura Long is a man who follows the orders of Huang Long. The battle is quite simple as long as Long is not hit by Ice spells, either by the Embryon or his own, as he will greatly healed by them.

Like the battles with the other strong demons, the battle has three stages. Unlike them, however, Long will begin the battle with hard hitting spells. His most dangerous attack throughout the battle is Mabufudyne, so it is imperative the party guards against that above anything else. During the first stage he will typically go a round of casting Makakaja twice, followed by Mind Charge and in the next round will unleash Mabufudyne followed by Revelation. During the second phase he will start using the same pattern but will also use Tarukaja for two turns and Power Charge. The next round will be Revelation followed by more attacks. He will also attempt to heal with Dia in this round.

During the final round he will begin mixing things together. With the Makakaja/Makakaja/Mind Charge rounds and Tarukaja/Tarukaja/Power Charge rounds back to back. He may also use the Rage skill to use Mind Charge and Mabufudyne back to back in this phase, allowing him to deal crippling damage without interruption. He will begin using Diarama in place of Dia to heal himself.

"One of Ssu-Ling, celestial creatures in Chinese lore.
It represents the direction east, the season of spring, and the element of wood. It is the noblest of the Ssu-Ling and dwells in a palace at the bottom of the ocean. In Feng Shui, placing water in the east side guides its power and is said to bring good fortune."
—Devil Survivor 2 compendium

"One of the Ssu-Ling, celestial creatures in Chinese lore. The four beasts were divided equally throughout the land to protect the five emperors in ancient China. There is even a mural depiction of them in Kitora Tomb in Japan. Long the azure dragon is protector of the east and represents the season of spring. In Feng Shui, placing water in the east, guides Long's power and is said to bring good fortune."
—Shin Megami Tensei: Liberation Dx2 compendium 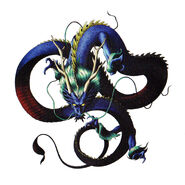 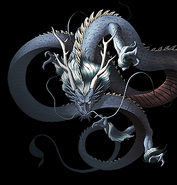 Long as he appears in Shin Megami Tensei III: Nocturne

Qing Long as he appears in Shin Megami Tensei IMAGINE

Qing Long as it appears in Last Bible II

Qing Long as it appears in Last Bible Special 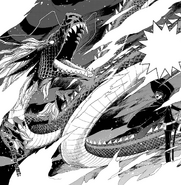 Seiryu as it appears in Devil Summoner: Raidou Kuzunoha vs. The Lone Marebito

Seiryu as it appears in Card Summoner

Seiryu as it appears in Devil Survivor

Seiryuu as he appears in Devil Survivor 2 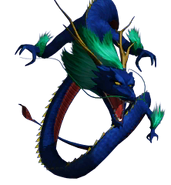 Seiryu as he appears in Persona Q: Shadow of the Labyrinth 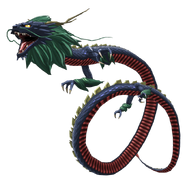