Starion
"Thou art I... and I am thou... From the sea of thy soul, I cometh... I shall lend you my strength..."
—Seimen Kongou, Shin Megami Tensei: Persona

Seimen Kongou is a Persona in the series.

Seimen Kongou, also known as Shoumen Kongou (青面金剛) is a Rakshasa of Hindu lore and a protector deity in Japanese Buddhist lore. The first record of Seimen Kongou comes from the Darani Jikkyou, a 7th-century text. He originally caused disease and suffering, but he rededicated himself to protect from the ills he once caused. He often appears as a blue deity with four arms who carries a three-pronged vajra, a staff, a wheel, and a coiled rope. The four objects represent various things: the Vajra represents the indestructible power of Buddhism; the staff is a ceremonial tool; the wheel represents Buddha's teachings; and the rope is a hunting weapon that symbolizes power over evil.

Seimen Kongou began to mix with Taoism during the Kamakura period, which caused him to become a deity of the cult of Koushin. The Koushin believed that on the eve of the new year, before leading to the year of the monkey, it was very easy to have your life cut short. To prevent this, they would gather scrolls of Seimen Kongou or Sarutahiko to hold a celebration. They remained awake all night in front of statues of the three monkeys; See no evil, Speak no evil, hear no evil.

"A being originated from the syncretism of the Taoist Koshin and the Dosojin Sarutahiko. Originally a demon who spread disease, he and his 9,000 servants would consume the souls, flesh, and blood of humans. He later decided to redeem himself and began to heal people from sickness and epidemics. Seimen Kongou is commonly depicted with blue skin, four arms, and a sword, while grabbing the hair of an evil bug disguised as a human who shortens people's lifespans, and trampling an evil demon under his foot.
It was during the Heian period (794-1185) that Seimen Kongou was first introduced to Japan, but it wasn't until the end of the Muromachi period (1336-1573) that knowledge of him became widespread. During the Edo period (1603-1868), it became popular to portray him in stone monuments as a servant of the three wise monkeys that embody the concept of "see no evil, hear no evil, speak no evil.""
—Persona World 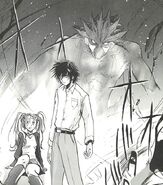 Seimen Kongou as he appears in the Megami Ibunroku Persona manga

Seimen Kongou as he appears in a PSP remake cutscene
Community content is available under CC-BY-SA unless otherwise noted.
Advertisement