Sedna is a demon in the series.

Sedna is the Inuit goddess of the sea and the creatures that inhabit it. She was greatly feared but sought out by Shamans for the release of the seals for hunting. She is seen by the Inuit as the mistress of life and death because she can provide for them (seals, fish, other sea animals), but can also punish them in ways that may cause death (storms, sickness, starvation).

Sedna's story begins as a beautiful princess who declines all suitors, except for a fulmar (a sea bird), who promises to take her away to his "comfortable and luxurious" palace, and she impulsively elopes with the fulmar. It turns out the "palace" was a filthy, smelly nest, and her new husband treated her like a slave. She begged her father to bring her back home and he did. Yet as they were heading back, a flock of fulmars were rocking the boat they were in. Fearing for his life, the father threw Sedna off the boat, and cut off her fingers and hands when she tried to climb back on. As she sank to the seabed, her mutilated appendages grew into fish, seals, whales, and all of the other sea mammals. She descended and eventually ruled over Adlivum, the land of the dead, and as the queen, she is responsible for the flow of food, and to make sure the flow doesn't stop, Inuit shamans descend down to Adlivum to soothe her pain.

"The Inuit goddess of the sea. She watches over her children, the fishes and seals. She is a terrifying one-eyed goddess and lives in a house made of stone and whale bones. However, only shamans can see it."
—Strange Journey compendium

Sedna can teach Nanashi the Mabufula, Mamudo, Posumudi and Diarama skills through her Demon Whisper. She benefits from learning Ice, healing and Darkness skills. 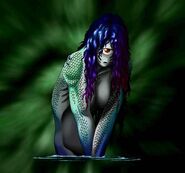 Sedna as it appears in Card Summoner
Community content is available under CC-BY-SA unless otherwise noted.
Advertisement