Edit
watch 02:58
No Man's Sky Update - The Loop
Do you like this video?
Play Sound
"Seems so. Just don't let it notice you beforehand... If it does, the Palace's security level will rise."
—Morgana, Persona 5

The Security Level is a mechanic in Persona 5.

"Well, the security level will go back down if we can beat more enemies without getting noticed."
—Morgana, Persona 5

Palaces are highly guarded by Shadows protecting the Cognition of the Palace. The Security Level starts at 0% but can be raised if the protagonist fails to remain hidden from a enemy symbol Shadow and is spotted. Additionally, running from a battle (or an enemy runs on their own volition) also increases the Security Level. The difficulty setting determines the rate at which the security meter goes up and down.

If the meter gets to yellow or red, the chance of finding Treasure Demons increases, allowing the party to kill them for loot. However, the encounter rate will also increase and the party may fight several waves of Shadows at a time (but that can be triggered even if the security level is dropped to 0.) Additionally, enemy symbols may react faster to spotting the protagonist should he enter their field of view.

When the Security Level reaches 100%, exploration is halted and the Phantom Thieves are forced to retreat immediately from the Palace, meaning they must come back on another day. The only exception to this rule (aside from Palaces after a calling card has been sent) is the Depths of Mementos, as the party will be locked inside it until they defeat Yaldabaoth.

The party can lower the Security Level by ambushing Shadows and defeating them: 1 Shadow defeated (or spared in negotiation) lowers the security level by 5%. This does not work if the protagonist has been spotted, unless a different enemy is attacked, which will also halt the protagonist from being spotted. Stealthanol can also be used to lower the security level by 10% per use.

Certain traps in Palaces can also increase the security meter, such as infrared lasers in Madarame's Palace. Sets of lasers that can be slid or jumped through need to be interacted with in advance, but dashing automatically allows the protagonist to pass through without any input.

Revisiting the Palace on another day will reduce the meter a bit as well. The Security Level can also be subsided by Ichiko Ohya's Confidant ability (theoretically Ichiko reports unfavorable scoop about the owner of the current Palace to distract that person from noticing the party's activities in the Palace). If one has connected to the Thieves Guild, a request can be made to reduce the Security Level when it hits 100%.

When the Phantom Thieves send a calling card, the Palace's security meter is fixed at 99% and will not boot the party out even when being discovered and ambushed by an enemy. The party can fight Shadows and lower the Security Level even after the calling card has been sent, although they can only reduce it down to 70%, and it will have no effect on the upcoming boss fight. However, it will stop Shadows from respawning if lowered sufficiently before reaching the Treasure room.

The Palace's current Security Level is depicted via a security meter, which is displayed when using the Third Eye ability. The security meter also features a stylized portrait of the Palace ruler. Depending on whether the Thieves have personally encountered the Palace ruler's Shadow or not when using the ability, their portrait will either depict the ruler's real-world self, partially shrouded in darkness, or the ruler's Shadow Self. Exceptions of this rule are: Suguru Kamoshida, since it is impossible to use Third Eye before meeting his Shadow Self; Futaba Sakura, whose Shadow Self's portrait remains unused, Masayoshi Shido, whose Shadow Self not only has multiple outfits and forms but is also never encountered or even seen before he is actually fought (Even the cutscene in which his Shadow Self reacts to his calling card has it remain in darkness.) and Takuto Maruki, whose portrait is represented by a black humanoid figure until he is personally met in the Palace and is not a Shadow Self but a physical human.

If the meter is yellow or red, the odds of encountering Disaster Shadows is also increased.

After the calling card has been sent, the security meter is fixed at 100% instead of 99%. Fighting shadows will only lower the Security Level down to 80%, rather than 70%.

Ichiko Ohya's Confidant abilities are also altered to accommodate this change; lowering the starting security meter, as well as preventing increase after a successful ambush, etc., unlike in the original where the security meter only lowers after a day has passed.

During key events, such as when the Phantom Thieves are infiltrating the Monarch's castle and after sending the Calling Card, the Jail's Security Level will be fixed at 99%, and will not increase or decrease during this time regardless of the player's actions. The aforementioned effects of high Security Levels also do not apply in this time.

Boss enemies can only appear once per visit after an hour has passed (roughly 12% on the security meter.) 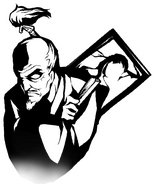 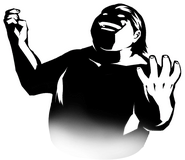 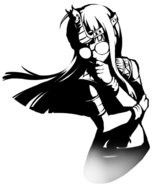 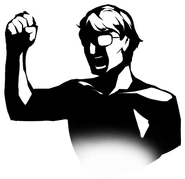 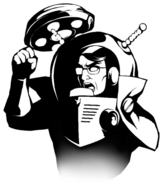 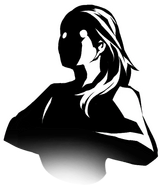 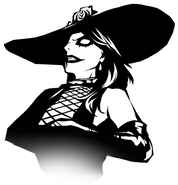 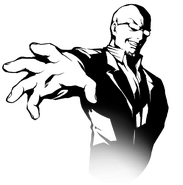 The general public, as represented in Mementos

Maruki as a hidden figure