Scylla is a recurring demon in the series.

Scylla is one of the two monsters in Greek mythology (the other being Charybdis) that lived on either side of a narrow channel of water (associated with the Strait of Messina). The two sides of the channel were so close to each other that sailors attempting to avoid Charybdis would pass too close to Scylla. In classical art, she was depicted as a fish-tailed mermaid with four to six dog-heads ringing her waist.

No ship that dares sail in her waters goes unscathed. Those that cling to survival whisper panicked tales of enormous black tentacles tipped with slavering hound heads ravaging whole ships to splinters with pitiless precision. Though it is her laughter, they say, that is most horrible; child-like, delighting in blood soaked murder as men are dragged into the dark abyss. Compared to Charybdis, who is a mindless beast, Scylla is merciless and consumed by hatred.

According to Ovid, Scylla was once a beautiful nymph. Glaucus fell in love with her, and she fled where he could not reach. Glaucus asked Circe to create a potion that would make Scylla fall in love with him. Circe, in turn, fell in love with Glaucus as he described his love for the nymph. Out of jealousy, Circe poisoned Scylla's bathing water, so that when Scylla bathed next, she became a grotesque sea monster with six heads. Each head had three rows of teeth and she possessed twelve canine legs and a cat tail.

"Origin: Turkey. Has a maiden's torso and a snake's tail. She is a poor girl whom the witch Circe turned into a monster out of jealousy. She lives in channels and attacks passing boats with her six dog heads."
—Shin Megami Tensei A-Mode DDS Dictionary

"A demon whose lower body was changed into six killer dogs by a mystic potion."
—Demonary, DemiKids

Scylla as she appears in Shin Megami Tensei II 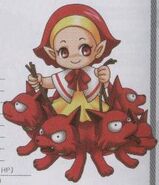