Scarecrow is a demon in the series.

A Scarecrow is usually a human like figure or mannequin dressed in human clothes. They are typically used to scare away crows.

"It wanders around aimlessly, brainless like a zombie. It tends to roam around places where demons appear. Though it looks human, its attacks are extremely weak. Judging from it appearance, it seems to have come from a hospital. Though it's unsure why, it continues to look for its brain, like the Scarecrow in "The Wizard of Oz""
—Akuma Zenshou

"Thought cursed with a body of straw, this demon is blessed with intelligence."
—DemiKids Demonary

Known as Skare, he has the power Target. Skare can be obtained in Light Version by completing the second of Wartak's five quizzes. 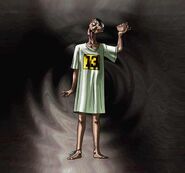 Scarecrow as seen in Devil Summoner.

Scarecrow as seen in Devil Children.
Add a photo to this gallery
Retrieved from "https://megamitensei.fandom.com/wiki/Scarecrow?oldid=415072"
Community content is available under CC-BY-SA unless otherwise noted.