Satanachia is a demon in the series.

Satanachia is a demonic spirit appearing in the Grand Grimoire. He is stated to be the Great General of Lucifer's army, controlling over 54 legions of spirits. He also holds the Goetic nobles Aamon, Barbatos, and Pruflas as his direct subordinates (The fealty of Aamon and Barbatos may effectively bolster the number of legions he controls by 40 and 30 respectively).

Satanachia possesses profound knowledge of all the planets. He also holds power over women. Jeanne D'Arc was accused of being under his influence. He appears as a strong soldier with blonde hair, wearing the armor of a Roman soldier with an orange breastplate but he does not wear a helm. He speaks slowly in a calm voice and does not say very much. 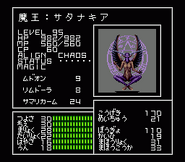