Sargatanas is a demon in the series.

Sargatanas is the Revealer of Hell or brigadier major-general of Hell of the armies of Hell in the Le dragon rouge grimoire. He counts the Goetic nobles Foraii, Leraje and Valefar. He is said to serve Astaroth and is represented by insects and is a member of the Six Great Officers.

This demon is summoned for his brainwashing abilities, necromancy, mind reading and memory erasing and stealing, but he can also give the gift of invisibility and the skill of lovemaking. He can also open all locks, transport people to distant places and scry on other houses.

Sargatanas is one of the demons summoned by Leonard during the battle against him. 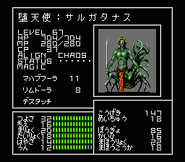