Sarasvati is a demon in the series.

Sarasvati, also known as Saraswati, is the goddess of knowledge, music and the arts in Hindu mythology. She has been identified with the Vedic Sarasvati River. She is considered as consort of Brahma, the Hindu god of creation. Thus, with the goddesses Lakshmi and Parvati, she forms the Tridevi, who are consorts of the male trinity, the Trimurti, consisting of Brahma, Vishnu and Shiva, respectively. Sarasvati's children are the Vedas, which are the oldest sacred texts of Hinduism.

She is known in East Asia as Benzaiten or Biancaitian (弁財天, Benzaiten)?, one of the Seven Lucky Gods in Japanese regional belief.

"Origin: India. The deification of one of the three holy rivers. She is the consort of the Deva god Brahma and goddess of music, education, and speech. In Buddhism she is known as Benzaiten, the goddess of monetary fortune. She is often shown with a book in her left hand and prayer beads in her right."
—Shin Megami Tensei A-Mode DDS dictionary

"The Hindu goddess of all knowledge. Her domain includes oration, learning, music, and the arts. Her name means "the one who flows" in Sanskrit, but it derives from her status as an incarnation of the Sarasvati River, one of the three sacred rivers of India.
For this reason, she is also known as the goddess of water and good harvests.
Born from the body of the creator god Brahma, Sarasvati was so beautiful that Brahma wanted her for his own wife, but Sarasvati refused him. However, Brama created four faces to surround Sarasvati and one above her with six eyes that all pursued her as she fled. At last, she relented and became his wife."

Sarasvati appears as a regular field boss on Suginami field. She later acts as a boss of the hack dungeon in Ichigaya.

Sarasvati can be found in Camp Ichigaya. She can teach Flynn the Bufudyne, Rakunda and Mabufudyne skills through her Demon Whisper.

"In Hindu lore, she is the consort of Brahma.
She embodies the river; her name means "one who flows." She is also the goddess of music and art, skilled in every art known to man."
—Shin Megami Tensei IV Apocalypse compendium

Sarasvati can be found in Minami Sunamachi. She can teach Nanashi the Bufudyne, Rakunda and Mabufula skills through her Demon Whisper. Sarasvati benefits from learning Ice and support skills.

"The consort of Brahma in Hindu lore.
She embodies the river and her name means "one who flows." She is also the goddess of music and art and is said to be skilled in every artistic or creative pursuit known to man."
—Shin Megami Tensei V lore

Sarasvati is a demon of the Megami race and can be obtained through fusion. Sarasvati can be fought as an enemy occupying an Abscess in Akihabara, alongside Silky and Kushinada-Hime.

"In Hindu myth, she is the goddess of rivers and patron of speech, writing, learning, and the arts and sciences. Brahma is her husband."
—Persona 3 compendium

Sarasvati was used by Makoto to cast an Ice spell on the Arcana Emperor and Arcana Empress. He obtained her after the Arcana Priestess was defeated.

"The Hindu goddess of rivers, and patron of speech, writing, learning, the arts, and sciences. Brahma is her husband."
—Persona 5 background

Sarasvati is the seventh Persona of the Priestess Arcana and can be found as a Shadow in Shido's Palace and in the Sheriruth area of Mementos, with the title "Strumming Veena Player." She is one of only four Personas available to the protagonist to learn the Me Patra skill and one of three to learn the Null Sleep skill. When itemized in the Velvet Room using Electric Chair execution, Sarasvati will yield a Mediarama skill card.

"In Hindu lore, she is the consort of Brahma and the goddess of knowledge, music, and art, who appears with a vina.
Because Vedas, songs offered to the gods, are said to be her creation, she is known as the mother of the Vedas. Brahma was fascinated by her beauty and though she tried to dodge his gaze, each time a new face formed. Finally, after he gained four faces, she realized that she could not escape and gave up, becoming his wife."
—Devil Survivor 2 compendium

In the animation, Otome has Sarasvati as her main demon. Sarasvati is summoned to fight against Phecda, and briefly manages to significantly damage the complete entity with her Drain attack before it separates. The separate halves of Phecda then destroy her, Hibiki's Suzaku and Io's Kikuri-Hime in a single blast of its combined laser.

Sarasvati later briefly appears fighting against a Megrez bud, again using Drain to attack it. However, this did not seem to impede Megrez's progress.

"The goddess of knowledge and wisdom in Hindu lore, and the wife of Brahma. Also as the goddess of music and arts, she is skilled in every art known to man, often depicted holding the lute. Her name means "the one who flows" for she is the incarnation of a river."
—Shin Megami Tensei: Liberation Dx2 compendium 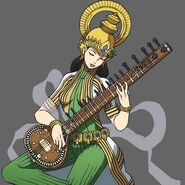 Concept movie artwork of Sarasvati in Persona 3 The Movie

Saravati in Devil Survivor 2 The Animation

Sarasvati as she appears in Shin Megami Tensei III: Nocturne

Sarasvati as she appears in Card Summoner 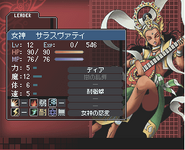 Saravasti as she appears in Devil Survivor

Sarasvati as she appears in Devil Survivor 2

Sarasvati as she appears in Persona 3 The Movie 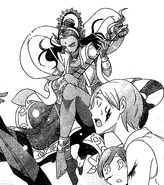 Sarasvati as she appears in the Devil Survivor manga

Sarasvati as she appears in Devil Survivor 2 The Animation