Hermit
Saori Hasegawa is a character from Persona 3 Portable. She is a student of Gekkoukan High School who can be found in the female protagonist's story.

A mature student of Gekkoukan High School, Saori has curly, dark gray hair, gray eyes and fair skin. Like most of the school's students, Saori wears its uniform while at school. If the female protagonist decides to accept her offer to hang out with her on days off, Saori wears a black turtleneck shirt along with a greenish gray dress, black tights and dark gray slippers. She also wears a silver necklace with a fancy pendant.

Soejima was told not to make her too focused on her makeup and clothes, but rather "everything comes naturally to her." He drew her with a particular emphasis on her eyes.[1]

As she is older than every other student, she always gets addressed in a formal way, which makes her feel uncomfortable. Saori is a kind person, but has severe problems with interacting with others, which leads to her becoming a victim of bullying and false rumors by other students.

Saori can be seen on April 7 in the faculty hallway where she is lost. Saori's Social Link commences on May 8, when Ms. Toriumi wants the protagonist to join either the library committee or the health committee. She replaces Ms. Toriumi as the Hermit Arcana Social Link during the female protagonist's route.

Saori Hasegawa is a second year student who has been living overseas, and is two years older than the protagonist. She has difficulty interacting with others because of this, and the people around her couldn't seem to understand her; this makes her feel really troubled. She can be found as a health or library committee member. Saori is kind, but very passive and distant, which leads to becoming a victim of bullying and false rumors by other students.

A boy asks her out for karaoke, and wanting some friends she says yes. However, unknown to her, the boy is already dating somebody, and when his girlfriend finds out they went out together, she yells at and slaps Saori. The girlfriend, intimidated by the female protagonist, then warns Saori to stay away from her boyfriend. This incident sours her reputation further, but the female protagonist stays by her side.

One night, a reporter pays her 4,000 yen to take a picture of her in public, as he claims to be pleased to see teens wearing their uniforms outside of school. However, the picture of her is censored out and the article it is featured in claims that she is partying excessively. Mr. Ekoda suspends Saori for her behavior, as others claimed that she was always seducing boys and cursing (which she only did once, to test out how it sounded). He warns the female protagonist not to be like her.

When she returns, she regretfully tells the female protagonist that her parents are sending her to a private school, thinking that she's a disgrace. At the female protagonist's suggestion, she gathers the courage to announce over the PA that she was innocent and just wanted to be friends with others. Ekoda comes to scold her, but Ms. Toriumi and Ms. Ounishi come to her defense and she is let off the hook. On her last day of school, Saori reveals that she recorded her message onto her phone. She transfers it to the female protagonist's cell phone, and tells her that she will always be on her mind and that she'll listen to her own speech for strength. She then leaves with her head held high.

At the end of the game, she sends a letter to the female protagonist, revealing why she was sent overseas. Her parents had sent her away because they blamed her for a serious incident. Once there, she had no one to support her, so she never went to school and took refuge in a church. Saori also mentions that she used to love someone but it's implied he killed himself because she "pushed them into a corner" and so she prays for his soul every day at the church.

Saori does not attend the school trip to Kyoto, even if her Social Link is not maxed. Yuko mentions overhearing girls gossiping about a student staying home because of people badmouthing her.

She and Rio Iwasaki appear briefly in the hallway. 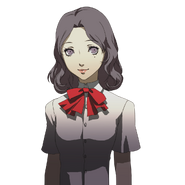 Saori in her summer school uniform 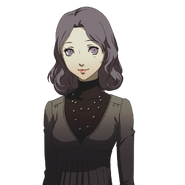 Saori in her casual clothes

Saori makes a cameo appearance in Persona 3 The Movie