Sandalphon is a demon in the series.

Sandalphon is an archangel or seraphim that is prominently featured in Jewish mysticism, such as the Kabbalah where he resides in the Sephirot of Malkuth alongside his "twin brother" Metatron. Sandalphon is described as the "dark angel" as opposed to his twin brother Metatron whom is regarded as the bright angel.

Sandalphon is regarded as the master of heavenly songs and it is said that a human would take 500 years to walk the length of his body alone clearly showing his celestial size.

Sandalphon is said to be responsible for determining the gender of a person in one's embryonic state, and in other accounts said to be a guardian angel who delivers prayers to God. Though not explicitly referenced in scripture, some of the earliest sources on Sandalphon refer to him as the prophet Elijah transfigured and risen to angelic status.

"Metatron's twin brother in Judeo-Christian lore. He makes garlands of prayers that are in Hebrew to present to God. He is also the master of heavenly songs. As his brother Metatron is known as the "bright angel", he is the "dark angel"."
—Devil Summoner: Soul Hackers 3DS compendium

"The twin brother of Metatron from Judeo-Christian lore. He is the master of heavenly songs. He is incredibly tall; it's said to take 500 years for a human to walk the length of his body."
—Gouma-Den devil chart

Sandalphon, like a few other Redux-exclusive demons before him, is unlocked for fusion by finding a switch in an isolated part of the Upper Layer of the Empyrean Ascent. Upon flipping the switch, Sandalphon awakens, and notes that there is still time before he is required to sing God's praises in the new world. He leaves, and becomes available for fusion. He can only be fused using Aniel and Kazfiel.

Sandalphon appears as the ultimate Persona of the Moon Arcana. He is available once the protagonist completes the Moon Social Link with either Nozomi Suemitsu (for the male protagonist) or Shinjiro Aragaki (for the female protagonist). The protagonist will need to fuse Gurr, Suzaku, Yatagarasu, Horus and Garuda together in a pentagon-spread fusion in order to obtain him.

Sandalphon is the ultimate Persona of the Moon Arcana. He is unlocked after the protagonist completes the Moon Arcana Social Link with Ai Ebihara. Unlike in Persona 3, he does not require a pentagon spread for fusion; a triangle spread with the 3 Moon Personas below him is the recommended method.

"Metatron's twin brother in Judeo-Christian lore, he is the master of heavenly songs. It is said that a human would take 500 years to walk the length of his body."
—Persona 5 background

Sandalphon is the ultimate Persona of the Moon Arcana and can only be obtained through fusion in the Velvet Room once the Moon Confidant with Yuuki Mishima is completed. He is the first Persona to learn the Angelic Grace skill and the only source of the Repel Curse skill. He is also the second of four Personas that learn the Sword Dance skill. When itemized through Electric Chair execution, Sandalphon yields the Angelic Grace skill card. Sandalphon is also required as part of an advanced fusion to summon Metatron, alongside Principality, Power, Dominion, Melchizedek and Michael.

Sandalphon is one of the brothers of Enoch that confronts Jin as he makes his way through Enoch's palace. After his defeat, the illusion dissipates to reveal a demon disguised as Sandalphon, who then disappears. The real Sandalphon's statue can be found in the Highest Peak, where he can be freed by Jin.

"The twin brother of Metatron, he is a powerful angel from Judaic lore.
This heavenly scribe was charged with delivering humanity's prayers to God. Hebrew prayers were braided into the laurels atop God's head. Music was another one of this angel's domains.
While Metatron is known as the "bright angel," Jewish mystics refer to Sandalphon as "dark angel"."

Sandalphon is unlocked for fusion after the protagonist reaches Fate Level 3 with Miyako Hotsuin.

"Angel of heavenly hymns. His name means "brother" and is the twin of Metatron. Sandalphon is a giant whose head reaches heaven and a man could spend life trying to climb him but never reach the top. He is also responsible for deciding the gender of a child in the womb and there are even theories of him actually being a woman."
—Shin Megami Tensei: Liberation Dx2 compendium 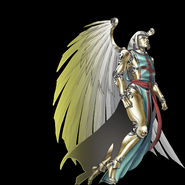 Sandalphon as it appears in Persona 4

Sandalphon as it appears in Card Summoner 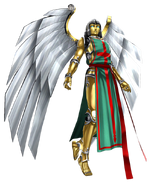 Sandalphon in Devil Summoner: Raidou Kuzunoha vs. The Soulless Army
Add a photo to this gallery
Retrieved from "https://megamitensei.fandom.com/wiki/Sandalphon?oldid=400453"
Community content is available under CC-BY-SA unless otherwise noted.