Shijima
"I am the fearsome king, the evil conscience of God, the serpent of a red Eden... I have many names, many theories bandied about me, and no doubt much awe attached to my name... Thou still darest challenge me...?"
—Samael, Shin Megami Tensei: Strange Journey

Samael is a demon in the series.

Samael, also known as Sammael or Samil, is an archangel in Talmudic lore. He has been known as the seducer, destroyer, accuser and has been regarded as both good and evil in various texts. In rabbinic lore, he was revealed as the chief of Satan's armies and as the angel of death. His name means "poison of God," suggesting he is either the vengeful hand of God or the enemy of God, and it has even been suggested that Samael is the angelic name of Satan himself.

In some early Jewish lore, Samael is the angel of death and chief ruler of the Fifth Heaven with two million angels at his command, residing himself within the Seventh Heaven. In one of these texts, the "Deuteronomy Rabbah" Samael is sent by God to retrieve the soul of Moses. He fails to do so as Moses blinds him by beating him with a staff engraved with God's true name, thus forcing God to intervene and remove Moses' soul personally.

He was also said to be the guardian angel of Esau (older brother of Jacob, who was renamed Israel, father of the Jews). In the Sayings of Rabbi Eliezer, Samael is charged with being the one who seduced and impregnated Eve with Cain. Other scholars suggest it was Azazel who seduced Eve and it was Samael who tempted Eve in the guise of the Serpent.

In Kabbalah, Samael is named as the fifth archangel in the world of Briah who took Lilith as his bride when she left Adam. He was also said to have mated with several of the angels of prostitution.

In some forms of Gnosticism, Samael is an alternate name for the Demiurge.

"Origin: Israel. His name means 'God's malice.' A fallen angel who appears with a sword, bow, and arrow. He was an archangel who once ruled over Mars. It's said he fell from grace when Adam was banished from Paradise."
—Shin Megami Tensei A-Mode DDS dictionary

"A mysterious angel with the name 'poison of god'. He is often depicted as a serpent. There are some theories that he is a fallen angel, but some say he is still an angel. Either way, he is associated with death."
—Shin Megami Tensei III: Nocturne Compendium

Samael is the demon summoned at the top of the Diet Building by Hikawa to slay the Demi-fiend if he attempts to stop him from offering Yuko Takao as a sacrifice. If the Demi-fiend is aligned with Shijima, Samael will later appear after the encounter with Ahriman in the Tower of Kagutsuchi, introducing himself and explaining that Hikawa instructed him to assist the protagonist, as he represents the champion of Shijima. Should the Demi-fiend accept his offer, Samael will join him, or if there is already one in the Demi-fiend's party or if he refuses, Samael hopes his services will be called upon later.

Alternatively, after fighting Samael or after having had him in the party, he is fusible through sacrificial fusion by arranging a fusion result of a Throne and sacrificing any Vile demon.

Samael appears as one of the three bosses of the Catacombs gold instance in Shinagawa. By obtaining his plug-in item and twenty of each of the fruit that drop from the mobs within the instance, a player is able to fuse him in a special fusion of Pazuzu, Uriel and Queen Mab.

He has his own signature skill: God's Malice, an almighty affinity area of effect attack that inflicts ailments and recovers his HP.

Samael appears as the strongest member of the Fallen race. He can be recruited from the encounters in Lucifer Palace, or created through fusion, both provided that Flynn has reached level 90. There are no special requirements to summon him.

Samael is required for the special fusion of Demiurge, the strongest demon available in the main game.

Samael is once again the strongest member of the Fallen race. He can teach Nanashi the Great Logos, Shivering Taboo, Doping, and Salvation skills through his Demon Whisper. Samael benefits from learning Almighty, Ailment, Healing, and support skills.

Samael is faced as a boss in the Neutral route in Paranoia, where he guards the base in the desert region of Nesdia.

"A mysterious angel with the name 'poison of God'. He is often shown as a serpent. Opinions differ on whether he is fallen or not, but either way, he is linked with death."
—Persona 4 compendium

Samael can be retrieved from Shuffle Time in the Void Quest dungeon.

Samael is the demonic form of Masayoshi Shido's Shadow Self, appearing as a far more muscular version of the human Masayoshi with springs wrapped under his clothing, and discolored skin in his most powerful form. He also utilizes a lion made out of golden humanoids in the first phase of his boss fight.

Samael can be encountered as a regular enemy and inside an Ammo Node in the Karma Temple and two Samaels can appear as reinforcements in the Anahata access of the Samsara Tunnels.

"A mysterious angel whose name means "poison of God". Though an angel, he is considered the leader of demons, often depicted as a large winged serpent. Opinions differ on whether he is one of the fallen or not."
—Shin Megami Tensei: Liberation Dx2 compendium

Samael as he appears in the SEGA FES 2019 artwork 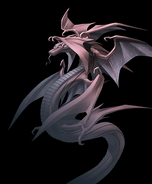 Samael's artwork as it appears in Persona 3

Samael as he appears in Last Bible II

Samael as he appears in Last Bible Special

Samael as he appears in Persona Q: Shadow of the Labyrinth 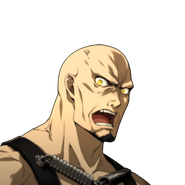 Samael as he appears in Persona 5 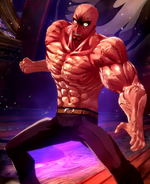 Samael's true form as it appears in Persona 5

Samael as he appears in Persona 5: The Animation

Samael as he appears in Persona 5: The Animation