Saki Mitama is a demon in the series.

In Japanese belief, Saki Mitama is a part of the soul that brings good fortune and blessings. It is said to bring prosperity in hunting, fishing and harvests, however some believe this is actually the purpose of Nigi Mitama.

"One of the four aspects of the human soul, as described in Shinto teachings. It is said to bring good luck in hunting and fishing."
—Shin Megami Tensei III: Nocturne profile

Saki Mitama is the fourth demon of the Mitama race and can be obtained either by fusing the Element race demons Aquans and Flaemis or by purchasing it at Rag's Jewelry in Ginza for one Jade stone and one Sapphire. A higher level Saki Mitama can be purchased with multiple stones. Unlike other demons, fusing Saki Mitama with another demon will power up that demon, with some restrictions. The demon being powered up must have available skill slots to receive skills from Saki Mitama and cannot have its stats boosted more than double its base stats, depending on the demon's level. Saki Mitama will increase the Vitality and Luck stats of a demon during fusion.

Saki Mitama can only be obtained through fusion or from jewel trade-ins at Rag's Jewelry. By using a Saki Mitama in the initial mitama fusion, the demon's post-mitama growth focuses on Luck, Vitality and Strength stats.

"One of the four great aspects of Shinto thought, it brings great bounty from the hunt. It is said to aid in love, profit, and growth, and can create new paths."
—Shin Megami Tensei: Strange Journey compendium

Saki Mitama is the highest level Mitama in the game and can be obtained by fusing two Prime race demons. Using Saki Mitama in a fusion will boost a demon's Vitality and Luck stats, along with transferring over useful skills.

Saki Mitama, along with Kusi Mitama, appear primarily in the DLC Challenge Quest "Experience of the Afterlife," and appear as a rare encounter with every Mitama in the DLC quests "Underworld Money-Maker" and "Death Has Its Applications." They drop Light Grimoire, which gives Flynn or any of his demons enough EXP to gain a level after 6 uses.

Saki Mitama is heavily resistant to damage, but is vulnerable to Almighty attacks, unlike the other Mitamas.

"One of the four great aspects of Shinto thought, it brings great bounty from the hunt.
It is said to aid in love, profit, and growth, and can even create new paths."
—Shin Megami Tensei V lore

Saki Mitama is an unrecruitable demon that can be found all over Da'at. Like the other Mitama, Saki Mitama have one randomized weakness, resists Almighty, and negates the rest, including ailments. To find the weakness without wasting Press Turns, a Spyglass is normally needed; otherwise a demon created specifically to Pierce resistances is in order. Their damage multiplier against weaknesses is roughly x9, greatly amplified compared to normal demons.

When defeated, Saki Mitama drops high end Relics, vendor trash items that Gustave will pay generous amounts of Macca for, specifically the rare Relics of that area of Da'at the Nahobino found them.

Normally having a sporadic spawn rate, the Mitama Dance of Wealth DLC offers an option to dramatically increase the spawn rate for Saki Mitama, installing a togglable option in the Options menu once purchased and downloaded.

Fusing any demon with a Saki Mitama will amplify its Luck and maximum HP stats, increasing its survivability. This can be done freely at the Goumaden, or with COMP Fusion, provided that the Steiner app is installed.

"One of the four aspects of Shinto thought, it brings great bounty from the hunt. It is said to aid in love, profit, and growth, and can create new paths."
—Persona 5 background

Saki Mitama is the second Persona of the Lovers Arcana and can only be obtained through fusion in the Velvet Room. It is the first source of the Wind Wall skill and Growth 1 and the first of two Personas to learn Resist Dizzy. When itemized through Electric Chair execution, Saki Mitama will yield a Rakukaja skill card.

Saki Mitama, along with the rest of the Mitama, can only be encountered at the end of a Field Hunt. Saki Mitama can be found in the Field Hunt areas of the Samsara Tunnels and the Karma Temple. The best strategy for defeating them is to use Electrical attacks to frighten them and then devour them before they can flee. Even while frightened they can cast buff skills such as Rakukaja and Sukukaja to reduce the party's ability to damage them.

Like the first game, Saki Mitama can only be encountered at the end of a Field Hunt. Saki Mitama appear in the Field Hunt areas of the EGG Installation (second visit only) and the Airport. Their skills and moveset remain largely unchanged from the previous game aside from a reduced HP stat and an added resistance to Almighty attacks.

Like all the other Mitamas, fusion for Saki Mitama can only be unlocked in a New Game Plus. 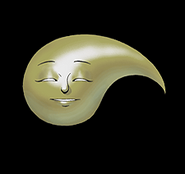 Saki Mitama as it appears in Persona 3

Saki Mitama as it appears in Card Summoner