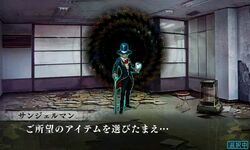 Saint Germain (サンジェルマン, San Jeruman)? is a quest giver and a character in the series.

Saint Germain, also known as the Count of St. Germain or Comte de Saint Germain, is a European adventurer, with an interest in science, alchemy and the arts which achieved prominence in European high society in the mid-1700s, who made far-fetched claims among other things to be three hundred years old, to know the secret of universal medicine, and to be capable of melting and forming diamonds, leading Voltaire to sarcastically dub him "The Wonderman."

St. Germain used a variety of names and titles, an accepted practice amongst royalty and nobility at the time. These include the Marquis de Montferrat, Comte Bellamarre, Chevalier Schoening, Count Weldon, Comte Soltikoff, Graf Tzarogy and Prinz Ragoczy.

A magician known as Earl of Saint Germain is a recurring antagonist in the New Digital Devil Story hexalogy. Supposedly acting as Lucifer's right-hand man, manipulating Yumiko to gather the Magnetite needed to stabilize Lucifer's army, later books reveal the Earl has his own agenda.

Saint Germain gives a number of DLC quests, asking for Life Stones in exchange for the Dwarfs that work under him making exotic armor for Flynn to wear. He does not make a physical appearance in the game.

Saint Germain fills the role traditionally held by Rag's Jewelry, trading various gems for items. He can first be encountered aboveground in Kinshicho. The items he trades for Emeralds and Garnets are the same everywhere, but for Diamonds he offers a different item at each location.

Saint Germain can be encountered in the Akarana Corridor, where he appears as a normal Time Tourist spirit. He offers to melt down diamonds into larger, more valuable gemstones, a herbal medicine that can cure any disease, and happily mentions that despite looking like a young man he is three hundred years old. He reveals his identity if Raidou asks him; he then decides to leave, feeling his work in Raidou's era is finished.

Germain is the client of the Case File 10-4 In Search of the Truth where he wishes to find the rare Aletia found on Kageboushi.