Robin Hood is a Persona in Persona 5.

Robin Hood is a heroic outlaw in English folklore who, according to legend, was a highly skilled archer and swordsman. Traditionally depicted as being dressed in Lincoln green, he is often portrayed as "robbing from the rich and giving to the poor" alongside his band of Merry Men. Robin Hood became a popular folk figure in the late-medieval period, and continues to be widely represented in literature, films and television.

Robin Hood fought against the evil Sheriff of Nottingham who was loyal to Prince John who had stolen the throne from his brother, Richard. Later stories introduced the Guy of Gisbourne, an assassin sent for Robin’s head who eventually became part of a love triangle with Marian.

According to the comment in the Design Works, Robin Hood's design is based on the comic hero Superman. The prominent "RH" shield logo on his chest not only echos Superman's "S" shield, it also reflects the letter "A" on Akechi's attaché case, a symbolism of his desire for public recognition.

"A noble thief that made waves in England during the Middle Ages. He is an expert archer and leader of the Merry Men, outlaws of justice who made Sherwood Forest their home."
—Persona 5 compendium

Robin Hood is one of Goro Akechi's Personas, and the Persona he uses while he is a party member. As later revealed, Akechi has the power of the Wild Card, and has access to another Persona, Loki, whom Akechi primarily used before he became a party member.

Robin Hood's skill roster focuses on Bless and Curse skills (as well as instakills) along with Almighty skills. Robin Hood’s final skill is Debilitate, which is the strongest debuff in the game, lowering one foe's Attack, Defense, and Accuracy/Evasion for 3 turns.

During the third term, Akechi only utilizes Loki as there is no longer a need to hide his true identity. Robin Hood can later fuse with Loki to form Akechi's third tier Persona, Hereward.

While similar, Loki and Robin Hood have some differences. While Loki maintains Robin Hood's focus on Physical, Almighty and Curse skills, it abandons insta-kill skills in favor of multi-target Gun damage and does not have any Bless skills at all. Another difference between Robin Hood and Loki is that their resistances and weaknesses are reversed.

Additionally, after Akechi first joins the party in Niijima's Palace, the protagonist may visit the Shujin Academy Library and borrow The Hero with a Bow, a book based on Robin Hood, which boosts the Guts stat.

Robin Hood appears as Akechi's main Persona. Much like Shinjiro Aragaki and Koromaru, Akechi doesn't get a different Persona upon his evolution. When his Persona is meant to evolve, Robin Hood gains a fiery blue aura around him to represent the evolution. 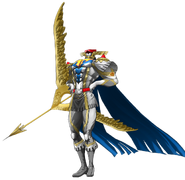