Saori Hayami (Drama CD)
Rio Iwasaki is a non-player character from Persona 3 Portable. She is a student of Gekkoukan High School who can be found if the player pursues the female protagonist's story.

Rio has long black hair tied in a ponytail, gray eyes, pale skin and uses light pink lip stick. Unlike the vast majority of Gekkoukan's students, Rio doesn't wear the complete uniform and instead only wears the uniform's skirt, combined with a white shirt along with a cream-colored sleeveless sweater. During practice, she changes into the regular sports suit. When she invites the protagonist to spend time with her, she wears a white sleeved shirt along with a gray vest, black pants and red sneakers.

When Soejima first designed her, he wanted to draw a smart woman. She was drawn to be very dignified. Rio was given a ponytail by Soejima because he loved ponytails. He wanted to draw Persona characters closer to real life. He was told to draw her that way.[1]

Rio is a member of one of the school's sports clubs and is fittingly very active, always giving her best when it comes to sports. Her incredible ambition, however, is also her biggest flaw. She urges the other members of the club to train more than they want and can in order to score high in tournaments. Despite her tough and often harsh attitude towards her comrades, she is moved fast and shows tears easily. Rio grew up with Kenji and she eventually developed a crush on him. As he likes older women instead of girls in his age, Kenji is oblivious to Rio's feelings. Kenji also describes her as sarcastic, referring to the way she replies during conversations. Also, Rio is good friends with Yuko.

Befriending Rio will help realize the protagonist the potential of the Chariot Arcana. Her Social Link can be activated starting April 24 by joining either the tennis club or the volleyball club. Though, the player will be forced to activate her Social Link on May 27 if they haven't done so yet.

Rio Iwasaki is an active second year student, and chief of the sports departments. She is very active and can be too serious when it comes to sports; that has landed her in trouble numerous times. Rio can be found either in the volleyball club or the tennis club. She is childhood friends with Kenji Tomochika, and is friends with Yuko. It is later revealed she has a crush on Kenji, but due to his interest in older women, and the team coach Ms. Kanou in particular, he is oblivious to her feelings. Her frustration with this causes her to take things too far sometimes, such as playing sports and even arcade games to the point of exhaustion.

Her strictness ends up coming to haunt her, resulting in the rest of the tennis or volleyball team to quit and hate Rio. Yuko takes concern in this, and tries to help them come back. For the next few ranks, the player and Rio will practice alone, until Ms. Kanou returns and the team reconciles. The team then helps Rio attempt to confess her love to Kenji Tomochika, though he remains oblivious. He tells her that he likes her as much as he likes ramen. That angers the team, but she is pleased, as ramen is Kenji's favorite thing in the world. She is still annoyed that Kenji likes older women, but she feels better. She then tells the female protagonist that she sees things differently, coming to actually liking tennis/volleyball, and that it is all thanks to her. She gives her her favorite tennis/volleyball manual, which will allow the player to fuse Thor, the strongest of the Chariot Arcana.

At the end of the game, if her social link has been maxed, Rio will bring the protagonist to the volleyball court or the tennis field (depending on which sport the player chooses) and expresses how she never had any fun playing until the protagonist joined the team as she found fun in it in discovering a goal in doing so. She blamed everything else for her own failures, even her teammates. She wondered what good it would do to keep on playing tennis/volleyball and she would have to end her love in it so she can go study, but when she was at career counseling she said she wanted to go to college by playing tennis/volleyball by a four-year scholarship and still play after she graduates, even going to the Olympics. She was worried about having a dream if it would fall through but she found the strength in doing it from the protagonist and the team. She then tells the protagonist she's going to a college training camp during Spring Break and hopes she doesn't complain about the training.

Rio is present when you meet Yukiko Amagi in the Yasoinaba field trip during summer vacation.

She attends the Kyoto field trip, and can be found talking with Kazushi and Kenji. She does not change into a yukata.

She and Yuko appear briefly in the hallway. 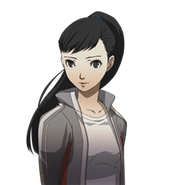 Rio in her Sports clothes 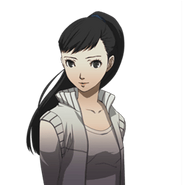 Rio in her casual outfit