Ribbon is a robot whose design resembles Aigis. She shares a frame with the other robots in the A.I.G.I.S movie, having a short body, stubby legs, large head, an antenna and pincer-like hands. However, unlike the others her body is white and she has an orange ribbon bow on her chest. She also has gold hair, and a face like Aigis, the character that it is based on.

Unlike the other robots seen in the movie reality, Ribbon is unique and has a personality, although at first she was in deep depression and merely considers her personality as an error and only wished for herself to be disposed of by the Overseer. The party's goal is to bring her out of her self-loathing and depression so she could change the movie's ending.

Once she gets out of her self-loathing, she reveals herself to be a kind robot that likes flowers and animals. Just like the real Aigis, she can translate Koromaru's speeches. Eventually, under the encouragement of the party she was able to rebel against and overthrow the A.I. system taking hold of all of the robot's personalities, giving it to all of them for good use.

Ribbon is a robot in the movie A.I.G.I.S and is the "villain" of the movie. She is unique among her peers, as she has a personality and emotions, being able to understand human customs and standards. Her codename is UIY-2249, but is named Ribbon by the party.

UIY-2249 is first encountered in the zone area of the movie reality she was in. She was asked to be initialized by a group of robots because she was an "error," which she actually wants to. However, the party rushes in and defeats the robots who tried to get her to be initialized. After they save her, she doubts why the party would save her despite the Overseer's orders being absolute. She states that she was an error and is considered dangerous for having a personality and simply wants to be initialized by the other robots. They explain to her that lacking personality is not human standards, and she looked like Aigis, so they wanted to use her to get Aigis and the P3 hero's whereabouts. The party recruits her as an escort in the movie reality, but she cannot fight, navigate or exit the movie.

The Overseer makes an announcement for UIY-2249's capture, and the party realizes that it was actually the robot's codename, as the robots in the movie were not given a name. Believing that the robot's codename was too difficult to pronounce and inappropriate, the party decided to nickname it. They thought of numerous nicknames for her but it was Futaba Sakura that decided to call her "Ribbon." The party agrees and Ribbon escorts the party throughout the dungeon with Futaba acting as her caretaker. During the exploration, just like the real Aigis, she displays the ability to understand animal languages, allowing her to translate Koromaru's speeches.

The party slowly makes Ribbon adapt to human emotions and customs, which she quickly adapts and develops. At one point she was even willing to pet Koromaru, thinking he was cute.

When the party confronts the Overseer, he demonstrates the ability to deactivate Ribbon just by using his gun. However after the battle, it was revealed that he just forced her sleep button to turn on and Futaba was able to awaken her with the flip of a switch. Afterwards she expresses the will to overthrow the Mother Computer who was oppressing her and the other robots, telling Futaba to activate her battle capabilities.

At the center disposal area of the movie, the party was instantly startled by a large pile of robots. Ribbon notifies them that defective robots are scrapped and destroyed, and this was where she intended to go after being initialized. She felt a strong feeling that she felt for the first time and could not describe it. The P3P heroine describes the feeling as "sadness."

The party reaches the command center to confront the Mother Computer and denies its twisted views, and it manipulates Ribbon into thinking that she was an error. After they deny this, it attacks the party, demonstrating powerful auto-recover abilities. In order to prevent it from auto recovering, Futaba hacks Ribbon into the AI's system. The plan seems to succeed only for it to reverse hack Ribbon and auto recover anyway. It also continues to attack Ribbon's mind, causing it to struggle between being herself or like others. However, Ribbon now expresses full will to destroy her creator and oppressor and activates Orgia Mode, completely blocking the Mother Computer's healing. The party defeats the Mother Computer and Ribbon is deactivated due to overload, with Aigis and Futaba trying their best to recover her. After the credits roll, Hikari expresses to Nagi her intention to discard her self by saying that she thinks that she is like Ribbon, who chose to be different from other robots only to sacrifice herself.

In reality, Ribbon has made a full recovery from the energy overload and free from any oppression, thanks to Futaba connecting her onto Aigis to resume her boot process, which was disabled due to overheating. She is now free to reconstruct the once-featureless false utopia into an actual utopia filled with personality and emotions.

It was later revealed that Ribbon's behavior and personality is based on Hikari's high school self and is thus a cognitive copy of her that appeared in the movie, being able to take this form due to it being an actor for it, and thus was able to appear as a different entity and only inheriting her host's behavior. During a night where she was creating a movie, her relatives visited her house and asked what she was doing. When she responded that she was making a film, they called it hopeless and asked her about her future occupation. She states that her future goal is to become a film director. Her relatives however, do not hold this in high regard and instead thought that she should study and work. They also threatened to talk about matters with her parents, despite the fact that they cannot as she lived in a single parent latchkey family, so her mother was absent and her father doesn't come home early often. As a punishment, her uncle tried to confiscate her father's camera from her, but was forced to lay his hands off it. The traumatic events had driven Hikari into extreme depression and so she became a shut-in devoid of any personality, setting stone for the upcoming events that led to her complete breakdown.

After the rejection of uniqueness by her relatives, Hikari began to doubt her goals and the reason for her existence, going as far as calling them an error, which forms Ribbon's self-loathing personality. She also wished that she could dispose of her own self, which is the reason why the Ribbon in the movie willingly let herself to be captured and initialized by the other robots before the Persona users appeared to defend her against them and her original fate is to be disposed of in the center disposal area. The robot in the movie took the form of Aigis due to S.E.E.S' perception of a "unique" member of their team.

Before the confrontation against the mastermind of the game, The edited version of the movie reveals that the other robots got a personality and Ribbon teaches them that flowers are cute.

During the credits, Ribbon is seen teaching the other robots about flowers and animals and planting flowers on the remains of the Mother Computer. 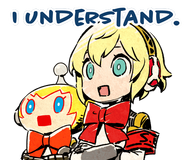