Karukozaka High School
"I know who's behind all of this, and I have an idea of what we're going to have to do.... You're the only one I think will be able to help. So please, give me a hand!"
—Reiko, Meeting Tamaki

Reiko Akanezawa is one of the human partners in Shin Megami Tensei: if....

Among the human partners, Reiko is the most collected and determined. Like Yumi she is very mature, but unlike her is much less emotional. She is also very mysterious - having ulterior motives unbeknownst to the player until the end of her route - and apparently comes off intimidating to her peers. Though they grew up estranged she is supportive of and attached to her brother, Ideo Hazama, and joins the player hoping to save him from himself. Like the other partners, she will also remark early on that she is not very good with computers, leaving the COMP to the player.

Reiko Akanezawa can be recruited if Tamaki refuses to help Charlie and Yumi and meets Reiko two times at the Music Club. She will be in the room first after visiting the Nurse's Office and next after collecting the equipment from the Storeroom and all 4 clubs.

On Reiko's path, a bit of Ideo Hazama's backstory is revealed. Reiko's path is an extended version of Yumi's path on which after beating Hazama one can enter his mind and beat him a second time, which unlocks the true ending of the game.

Reiko appears much differently than she does in the original game. She is a classmate of Nobu when he transfers following the incident at Karukozaka. While she initially is friendly with him, even trusting him after being framed for his mother's murder, she yells at him when she discovers he is responsible for her brother's death. She is responsible for Hazama's later reincarnation.

Reiko's stats are chosen at random from 4 distributions:

Reiko with the If... cast 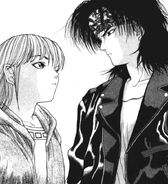