Christian La Monte (Nocturne HD)
"I can sense it, Samurai... you and I both tread a bloody path. Since our roads have crossed here, now is the time for wicked bloodshed... Draw your blade and make war with Death, the red knight stained with blood!"
—Red Rider, Shin Megami Tensei IV

Red Rider is a demon in the series.

"When He broke the second seal, I heard the second living creature saying, “Come.” And another, a red horse, went out; and to him who sat on it, it was granted to take peace from the earth, and that men would slay one another; and a great sword was given to him."
—Revelation 6:3-4.

The Red Rider, or Red Horseman, is the second of the Four Horsemen of the Apocalypse, also named War. He represents war, and his horse is colored "fiery" red and bearing a sword of war. Unlike Conquest, the Red Horseman of War specializes in waging war between nations and people rather than internal strife.

He holds a great sword upwards as though ready to battle or mass slaughter. The sword is meant to suggest that blood will be spilled. The great sword being held upwards can also be viewed as a declaration of war, as typically, crossed swords held upward in heraldry signify entering in battle. He takes peace from the Earth and allows men to kill one another.

The color of the horse, coupled with the rider's sword, symbolizes the great blood shed that must ultimately befall the world, and to some he also symbolizes divine wrath and spiritual warfare, making him even more formidable than he already appears.

"One of the four horsemen of the apocalypse. He rides on a red horse and holds a great sword. He has the power to take peace from the earth and make men to kill each other."
—Shin Megami Tensei III: Nocturne compendium

Red Rider appears as the summon orb boss of the Suginami Tunnels silver-level instance. He also appears as a boss within the Chain of Curse Deep Docks instance and a boss of the TR-Route of Denshi Kairo, through which the ability to fuse him can be obtained. He is a special triple fusion of White Rider, Power and Koumokuten.

"One of the four horsemen of the Apocalypse, he rides a red horse and carries a great sword. He has the power to destroy peace and make people slay one another."
—Shin Megami Tensei: Strange Journey compendium

Red Rider appears as the resident Fiend of Sector Eridanus, and must be defeated in combat to unlock his fusion. He is the only demon that drops the Sword Shard Forma after its defeat.

Red Rider is one of seven fiends available to fight as an optional battle. He is found in Kasumigaseki, in the underground area that requires ID Card Lv3 to access; for this reason, he can only be fought on the Neutral route. He has a 1/256 chance of spawning behind the door that requires 100 Luck to open; if he doesn't show up, a message display pops up saying that nobody is present. His Almighty-spam mode is set by Fire resistance. However, unlike other Fiends, he will use his Almighty attack (Antichthon) frequently even if the party does not resist Fire or Physical attacks. Defeating him awards Flynn with a Soma, 10 of each incense and the ability to obtain him through special fusion.

Red Rider is fought alongside the other three in the Challenge Quest, "Errand for the Apocalypse." Belial has sealed the four in a Domain found in Infernal Tokyo's Ikebukuro. They are far weaker than they are when encountered normally, however that does not make them any less threatening. If Flynn makes any attempt to challenge them before accepting the quest, the Fiends will eject him from the Domain. Completing the quest grants Flynn the Peacemaker, which is only surpassed by the Plasma Gun in terms of raw power.

Red Rider, along with all the other Fiends, is encountered in Twisted Tokyo. Red Rider is encountered on B14 and drops the Chaos Sword second cycle onward. He is fought at level 946 on cycle 9.

Red Rider, along with the other Fiends that held Menorahs and the Demi-fiend, are set to appear as part of the Return of the True Demon DLC pack. As before, defeating Red Rider unlocks the ability to fuse him.

"One of the Four Horseman of the Apocalypse, he rides a red horse and carries a great sword. He has the power to destroy peace and make men slay one another."
—Persona 5 background 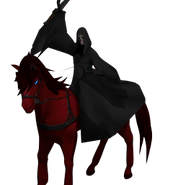 Red Rider as he appears in Persona Q: Shadow of the Labyrinth.