Kirk Thornton
"I'm a human... Five years ago, on that day... No... I'm Raphael... My duty is to build the Millennial Kingdom by God's authority! Witness the fury of the heavens!"
—Raphael, Digital Devil Saga: Avatar Tuner 2

Raphael, also known as Raphaela, is a demon in the series.

Raphael, or Raphaela, is one of the four main seraphim or archangels of God within the hierarchy of angels from Christian and Islamic mythology, His name means "It is God that heals." Not all branches of these religions consider the identification of Raphael to be canonical.

He is said to be the guardian of the Tree of Life, opposite the Tree of Knowledge in the Garden of Eden. He also expounds to Adam the War in Heaven in which Lucifer and the Fallen angels fell, and the creation of the Earth. Raphael first appears disguised in human form as the travelling companion of Tobit's son Tobiah, calling himself "Azarias the son of the great Ananias."

Most of Raphael's exploits take place in the Apocrypha, where he has roles as imprisoner of Azazel (an Angel that gets exiled from Heaven for having sex with human females and one of the Grigori) and guide of Sheol, the Hebrew underworld. Although Raphael is not named in the Bible, theologians believe he was the archangel who healed the infirm at the Bethesda pond described in the Gospels. He is also thought to be one of the three angels who visited the patriarch Abraham and his wife, Sarah, to help with their conception; as well as the angel who healed Abraham’s grandson Jacob’s wrestling injuries and who gave King Solomon his magical ring.

Though he is not depicted as a lover of another being, Raphael appears in The Lovers Tarot Card, and his status of the patron Saint of lovers due to his involvement of uniting Sarah & Tobias in the Book of Tobit. Raphael is also portrayed in religious art as carrying a stick or cane and walking, often leading a lost child or traveler back to the right direction, symbolizing Raphael's role as patron saint of travelers and exemplary guardian angel. Saint Raphael is also accounted as a patron of the blind, happy meetings, nurses, physicians, medical workers, matchmakers, Christian marriage, and Catholic studies.

In Islam, Raphael is the angel responsible for signaling the coming of Judgment Day by blowing the trumpet (namely Sûr) and sending out a "Blast of Truth." According to tradition, the trumpet will be blown two times. According to some sources, the demon lord Asmodeus is his counterpart and they have a longstanding feud with each other.

He is one of the four archangels in the service of YHVH and is usually seen with Gabriel, Uriel and Michael.

"Origin: Israel. One of the 4 heralds, the seraph of wind. An angel with a gentle temperament who is said to blend in with humans and speak with them. He guards the tree of life in the Garden of Eden and rules over the cherubs."
—Shin Megami Tensei A-Mode DDS Dictionary

Along with Uriel and Gabriel, Raphael is one of the three major sub-bosses of the last arc of the game—the seraphim, and one of the most powerful angels under God's orders that stands guarding the superior part of the Basilica.

He appears defending the fourth floor, accusing the protagonist of being "covered in the blood of the righteous" before engaging him in battle in case he's not law aligned. This fight, however, is entire optional, as the player can choose to just take the stairs towards the next floor without having to enter Raphael's room.

In Law route, he instead joins the protagonist's party, as he is required in order for a triple fusion with Uriel and Gabriel can be performed, resulting in the creation of the "Angel Ring"—a valuable item needed for the final showdown against Asura to become available.

"One of the four major archangels. His name means "healer". He explains the history of the fallen angels and the creation of Adam and Eve."
—Shin Megami Tensei III: Nocturne compendium

Raphael is encountered and fought in Mifunashiro if the Demi-fiend is against the Reason of Yosuga. He is fought along with Gabriel and Uriel. Following his defeat, he can be created by fusing a Dominion with Uriel.

The ability to fuse Raphael comes from completing the Blessed Light quest, where players with a Uriel summoned are asked by an NPC to defeat the Mad Avatar Raphael that regularly spawns in Shibuya by Celu Tower. He is a special triple fusion of Uriel and two Thrones.

The true identity of one of the masked men at Kagome Tower. He reveals his true form at Shene Duque alongside the other three. He is fought in the DLC Challenge Quest Clipped Wings 1. During the battle, Raphael will ask Flynn if the situation fills him with melancholy. Answering no will cause Raphael to lose a Press Turn. Upon defeat, he will ask why Flynn, one of the chosen, is smiting the archangels and wonders if he has the same "unclean blood" as Aquila.

A statue of Raphael can be seen in the Diet Building in Nagatacho, radiating a purple aura.

Before the Creator ruled Da'at, Raphael served under Baal alongside his fellow seraphim Uriel and Gabriel. They are still revered by the angels of Bethel, although their status meant that it was forbidden for an angel to turn their weapon on them. However, their Magatsuhi is necessary for a particular Melchizedek to free Michael from his prison, so said Melchizedek requests the protagonist to gather their Magatsuhi and defeat them as part of the quest "The Holy Ring." Defeating the seraphim will unlock them for fusion.

Raphael can be fused through a special fusion of Uriel and Dominion. He is one of the three demons required to fuse Michael. Raphael primarily benefits from learning Force skills.

"One of the four major archangels, his name means "healer." He recites the history of the fallen angels and the creation of Adam and Eve."
—Persona 5 background

Raphael is the eighth Persona of the Lovers Arcana and can only be obtained through fusion in the Velvet Room. He is the first Persona to learn the Sword Dance and Heat Riser skill and one of three Personas to learn the Arms Master skill. When itemized using an Electric Chair execution, Raphael yields a Heat Riser Skill Card. Raphael is one of the Personas needed to summon Michael through advanced fusion. Raphael appears as the second guardian on the Path to the Holy Grail in the Qliphoth World, with the title of "Cleanser of Heaven."

"A king, caring angel who spares no effort towards curing the sick and injured."
—Demonary, DemiKids

Raphael has the special power WindProof, which prevents death by wind attacks. Raphael can do the light based combo War Breath with Uriel, which increases the party's stats for 15 MP. Raphael can perform the combo Soul Eater with Dred Cat.

Raphael is a spy sent by Ose to keep track and sabotage the Devil Children's attempts at stopping Empra. He's also an inventor who tends to build machines that go out of control. He has a younger brother and sister named Zadkiel and Tabbris, and after becoming close with the party, he eventually betrays the Imperium once they threaten his family.

Raphael, along with the other three archangels, are optional bosses to be encountered before the party enters the airport. Much like the other archangels, Raphael is a human turned demon who struggles with recollecting his memory and his hunger, along with suffering from an identity crisis where he believes he is a Millennial Kingdom angel. Raphael resides in the internment factory in the same room where the party picks up the processed can used to weaken the Jailer.

Raphael specializes in using electricity and wind attacks in battle while boasting physical attacks that target the party. He also possesses Debilitate. 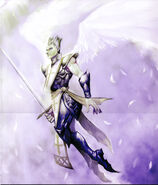 Raphael as he appears in Shin Megami Tensei IV 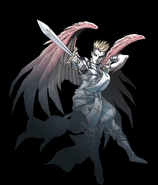 Raphael as he appears in Persona 3

Raphael as he appears in Shin Megami Tensei: Liberation Dx2

Raphael as he appears in Devil Children Red/Black Book

Raphael's sprite as it appears in Shin Megami Tensei II

Raphael as he appears in Shin Megami Tensei III: Nocturne

Raphael's sprite as it appears in Last Bible III 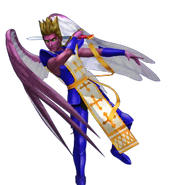 Raphael as he appears in Persona Q: Shadow of the Labyrinth

Raphael as he appears in Persona 5 Royal 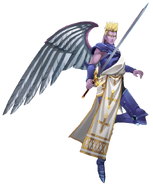 Raphael as he appears in Persona O.A.

Raphael as he appears in Persona O.A. (No Background)