Raoul is a Persona in Persona 5 Royal.

Arsène Raoul Lupin is a fictional thief created by Maurice Leblanc, first published in the magazine Je sais tout in 1905. He was featured in a multitude of short stories and novels, including numerous films, television, stage plays and comic adaptations. He was known as a "gentleman burglar" who likes to target extremely wealthy individuals and criminals who were much worse than himself.

Raoul was first mentioned in "The Queen's Necklace," a short story included in Arsène Lupin, Gentleman Burglar, and was also alluded by the narration to be Arsène Lupin's true name. Raoul also appears in multiple other novels as a common alias for Lupin, such as The Countess of Cagliostro as Raoul d'Andrésy.

In contrast to Arsène, who resembles a Victorian gentleman, Raoul has a more modern and steampunk-inspired design. Its most apparent distinctions are the mechanical wings made of leather and metal, with a shape akin to the wings of bats. It is dressed in a vivid red jacket with golden trims, a white shirt paired with black-tie underneath and topped with a red fedora. It wears a black belt with a gold buckle, dark pants and thigh-high boots that are decorated with gold studs on the sides of its thighs. It wears white, fingerless gloves with gold-tipped claws at the end of its fingers. It is also equipped with long, bladed heels much like Arsène. Similarly, it has a demonic face with red eyes and holds a cigarette in its jagged mouth resembling sharp teeth or fangs.

"Another alias of Maurice Leblanc's hero, Arsène Lupin. Infamous as a phantom thief, he was also known to be a man of many friends, lovers, and treasured allies."
—Persona 5 Compendium

Raoul is the third-tier Persona of the protagonist only available through DLC. It is purchasable for 300 yen. In the English version, Raoul is bought alongside other DLC Persona in a bundle for $9.99. 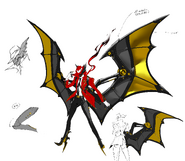