Rampage Drive is a Shadow in the series.

Rampage Drive is a sub-boss found on the 14th floor of Thebel Block in Tartarus. It impedes the party's progress and must be beaten to proceed.

Rampage Drive is notorious since it appears early in the game, at a stage where the only party members available are likely Junpei Iori and Yukari Takeba. Junpei has difficulty damaging the boss since it is immune to all Physical attacks and resists Fire, while Yukari will face trouble if it continues to cast Mazio to keep her knocked down. Buffs and debuffs will definitely be useful in squeezing extra damage onto the boss or reducing the chances of getting hit by its troublesome attacks.

The best strategy is to level up the Persona Pixie until it learns the ability Pulinpa. This will prevent the boss from using its most powerful attacks, including Mazio, until the effect wears off. By declawing the boss in this manner, it can be beaten much earlier in the game. Another strategy is to use the Cadenza fusion spell between Orpheus and Apsaras, since it raises the party's hit and evasion and recovers 50% of the party's HP. Using a Persona resistant to Electricity, such as Omoikane or Lilim, and can cast Zio will help too, as Electricity is effective against Rampage Drive. If a Magic Mirror is found beforehand, it can be used to reflect Mazio, which will land as many hits of Electricity damage as there are members in the party, taking a good chunk of its health.

Rampage Drive appears on the 7th Path of Yomotsu Hirasaka within the Midnight Channel. It alternates between physical strikes and Mind Slice and may counter Physical attacks. After being defeated, it may drop a Platinum Gear. Selling 10 Platinum Gears at the TV extension of Daidara will unlock the Christ Mirror weapon for Kanji Tatsumi.

Rampage Drive may appear as a Red Shadow as early as Path 1.

Rampage Drive appears throughout several floors of the Clock Tower. Defeating it with Light attacks will cause it to drop the H Drive Gear, which is needed for one of Elizabeth's requests.

Rampage Drive appears in Zone 1 of A.I.G.I.S.. When defeated, it may drop Drive Core and Drive Screw. Drive Core is used to create Cobra Boots* for Chie Satonaka, and the Megaton Hammer for Shinjiro Aragaki*. Drive Screw is used to create the Erg Saber* for Goro Akechi, Bucking Broncos* for Chie, the Inversion Fan* and Suzumushi* for Yukiko Amagi, and the Spiral Bow* for Yukari Takeba. 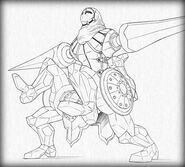 Rampage Drive as it appears in Spring of Birth
Community content is available under CC-BY-SA unless otherwise noted.
Advertisement