View source
watch 03:01
Wiki Targeted (Games)
Do you like this video?
Play Sound

Raja Naga is a demon in the series.

Naga Raja are the many kings of nagas with many stories involving them in Hindu mythology. Raja Naga also appear in Buddhist mythology, and their duties consist of leading the nagas and protecting and worshipping the Buddha, along with protecting other enlightened beings.

"Origin: India. The name of the Royal Nagas in Naga society. Nagas are a race of dragons that live in a wide area reaching from Iran to Japan. Snake gods with the title of Raja Naga include Ananta, the 1000-headed snake. There is also Vasuki, who wrapped himself around Mount Mandarachala and changed into a rope."
—Shin Megami Tensei A-Mode DDS dictionary

Raja Naga is obtained by evolving a Naga when he's reached a high enough level.

"A were-snake that appears in Hindu mythology. The Raja Naga is a member of the top echelon of Naga royalty. They are said to reside in India, Southwest Asia and even Japan. They come in a variety of striking forms, from those whose top half is that of a snake to those who sport numerous cobra heads or even wings.
The name Naga means "cobra", and these beings are considered deities that embody the life force and unique appearance of these snakes."
—Shin Megami Tensei IMAGINE compendium

Raja Naga appears at Shinagawa at night and spawns as support for Girimehkala when he acts as a field boss. They also appear as non-contractable variants alongside the second form of Qing Long and Yamata-no-Orochi in Ueno's Kuchinawa Cave.

"The king of the Naga, a half-man, half-snake tribe in Hindu mythology. The dragon kings Nanda and Takshaka of Buddhist myth fall into this royal category."
—Devil Summoner: Raidou Kuzunoha vs. The Soulless Army devil chart

Raja Naga begins appearing as a random encounter in Dark Fukagawa-Cho in Episode 7.

The fourth Persona of the Aeon Arcana, Raja Naga can be fused once the protagonist has achieved a sufficiently high Social Link with Marie, providing that they are at least level 37 before trying to create it through fusion. It cannot be found in Shuffle Time, as is normal for the Personas of the Aeon Arcana.

"The king of the Naga, a half-man, half-snake tribe in Hindu lore. The dragon kings Nanda and Takshaka of Buddhist myth fall into this royal category."
—Persona 5 background

Raja Naga is the eighth Persona of the Temperance Arcana and can only be obtained through fusion in the Velvet Room. He is one of four Personas to learn Shock Boost and the first of two Personas to learn Evade Wind. When itemized through Electric Chair execution, Raja Naga yields a Ziodyne Skill Card. Raja Naga is one of the ingredients needed to summon Vasuki using advanced fusion.

Raja Naga also appears as a Shadow called the "Snake King" at the end of the House of Darkness area of Niijima's Palace. After revealing that he had no intention of allowing the Phantom Thieves win fairly, he will attack the group should they refuse to back down.

Raja Naga acts as a boss encountered inside the power plant, near the end of the facility. The fight is split into waves, with three Naga making up the first and Raja Naga following second along with two Naga. The Naga will act to block Raja Naga's Fire weakness and attack the party while also trying to plant Mute on them.

The three together have an enemy combo attack, Conviction, which will instantly kill any party member afflicted by Mute when used. Raja Naga will also continually summon reinforcements throughout the fight if one or both are dispatched. 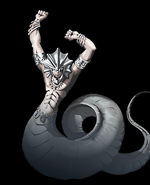 Raja Naga as he appears in Persona 3