Queen Mab is a demon in the series.

Mab, also known as Medb or Meive, is the queen of Connacht. Famous for her capricious nature and her many lovers, she wages many wars for the sake of her continued glory. The Cattle Raid of Cooley makes her cross paths with her archenemy Cu Chulainn, who shamed her numerous times by slaying her pets, warriors and handmaidens. She is the enemy (and former wife) of Conchobar mac Nessa, king of Ulster, and is best known for starting the Táin Bó Cúailnge ("The Cattle Raid of Cooley") to steal Ulster's prize stud bull Donn Cúailnge.

Medb is strong-willed, ambitious, cunning and promiscuous, and is an archetypal warrior queen. She is believed by some to be a manifestation of the sovereignty goddess. Medb is described as a fair haired wolf queen, whose form was so beautiful that it robbed men of two-thirds of their valor upon seeing her. She may be the inspiration for the fairy Queen Mab found in William Shakespeare's Romeo and Juliet and other media.

Queen Mab is said to be the queen of the Unseelie Court and the dark counterpart of the fairy queen Titania. She was first referred as a fairy in William Shakespeare's play Romeo and Juliet, where "she is the fairies' midwife." Later, she appears in other poetry and literature, and in various guises in drama and cinema. In the play, her activity is described in a famous speech by Mercutio written originally in prose and often adapted into iambic pentameter, in which she is described as a miniature creature who performs midnight pranks upon sleepers. Being driven by a team of atomies, she rides her chariot over their noses and "delivers the fancies of sleeping men." She is also described as a midwife to help sleepers "give birth" to their dreams.

She was immortalized in Mercutio's legendary monologue of Romeo And Juliet (Act I, Scene 4), which is often called the "Queen Mab Speech," which included:

And in this state she gallops night by night
Through lovers' brains, and then they dream of love
O'er courtiers' knees, that dream on court'sies straight
O'er lawyers' fingers, who straight dream on fees
O'er ladies' lips, who straight on kisses dream
Which oft the angry Mab with blisters plagues...

Queen Mab can be obtained through evolving High Pixie. Even though Queen Mab can be created via secondary evolution from Pixie, unlike Kurama or Wu Kong, for example, she can be encountered in normal battles in the Diet Building or Tower of Kagutsuchi and can be persuaded to join the Demi-fiend's team. A normally recruited Queen Mab will also have Ziodyne, Tarukaja, and Mediarama which an evolved one cannot gain through level-up.

"A queen appearing in Celtic mythology. She is the queen of Connacht in Ireland. Her name means "she who intoxicates." She is considered a goddess of the harvest and of rulership, owing to her many marriages with Irish kings.
Queen Mab tried to seduce the Irish hero Cu Chulainn using her own daughter, but failed. In the end, enraged by the enormous losses he inflicted on the army of Connacht, she manipulated him into breaking his geis (taboo), weakening him, and then had him killed by her magicians.
Mab's death is recorded in 11th-century documents. She is held to have been killed by a piece of hard cheese flung from a sling.
Mab is also known as queen of the fairies, and is identified with the fairy queen Titania."

Queen Mab can only be acquired through fusion. She appears as a boss in the neutral path of the Foreign Country in the Woods quest.

Queen Mab can be found in the Infernal Tokyo version of Camp Ichigaya. She can teach Flynn the Diarahan and Makarakarn skills through her Demon Whisper.

"The fairy queen in Celtic myth. Often identified with Titania, Oberon's wife. She would offer mead mixed with her blood to her many consorts."
—Shin Megami Tensei IV Apocalypse compendium

Queen Mab can be found in the Firmament areas of the Sky Tower. She can teach Nanashi the Diarahan, Sexy Dance, Amrita and Mazandyne skills through her Demon Whisper. Queen Mab benefits from learning Force, ailment and healing skills.

"The queen of fairies in Celtic mythology.
Some say she was the inspiration for William Shakespeare's Queen Mab, leading many to conclude that she and the fairy queen Titania, Oberon's wife, are one and the same. She was known to give mead mixed with her blood to her many consorts."
—Shin Megami Tensei V lore

In the game she is referred to as Queen Medb. She can be found in Ginza and requests the protagonist to collect gems for her as part the "Glitter in Ginza" quest. Once the quest is completed, they may continue giving her diamonds, garnets and aquamarines in return for various incenses.

"The fairy queen of Celtic myth. Often identified with Titania, Oberon's wife. She would offer mead mixed with her blood to her many consorts."
—Persona Q: Shadow of the Labyrinth compendium

"The fairy queen in Celtic myth. Often identified with Titania. She would offer mead mixed with her blood to her many consorts."
—Persona 5 background

Queen Mab is the sixth Persona of the Magician Arcana and can be found in Niijima's Palace and the Sheriruth area of Mementos, with the title "Midnight Queen." She is the first Persona to learn Makara Break and the first usable Persona to learn Agidyne. When itemized through Electric Chair execution, Queen Mab will yield the Masquerade Ribbon whip for Ann Takamaki, which has 172 ATK, 88 ACC and adds the +Dizzy (low) effect to Ann's attacks.

"The fairy queen in Celtic myth. Often identified with Titania. She would offer mead mixed with her blood to her many consorts."
—Persona 5 Strikers background 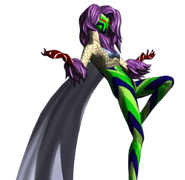 Queen Mab as she appears in Persona Q: Shadow of the Labyrinth