Python is a recurring demon in the series.

In Greek mythology, Python was the earth-dragon of Delphi, represented as a serpent. She presided at the Delphic oracle, which existed in the cult center for her mother, Gaia. Hellenes considered the site to be the center of the earth, represented by a stone (the Omphalos or navel) which Python guarded.

Python became the chthonic enemy of the later Olympian deity Apollo, who slew her and remade her former home and the oracle, the most famous in Classical Greece, as his own.

Python can be found in Camp Ichigaya. It can teach Nanashi the Mamudoon, Fog Breath, Pandemic Bomb and Maziodyne skills through its Demon Whisper. It benefits from learning ailment, Electricity, Darkness and support skills.

"A gigantic, black snake god born from the Greek goddess Gaea with no father.
He has unparalleled prophetic abilities and has protected oracular shrines since days of old. Python is said to have been the guardian of Delphi, site of Delphic oracles. He is sometimes called "the king of the deceitful spirits" and gave prophecies that would only be in his favor, but he never gave prophecies that went against Gaea's will."
—Devil Survivor 2 compendium 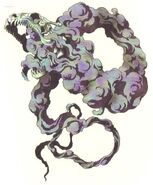 Python as it appears in Shin Megami Tensei: Devil Summoner

Python as it appears in Card Summoner