Keiji Minegishi(Nightmare of the Butterfly)

18
"You're a member of the great hacker group, the Spookies. You ought to be able to pull this off, at least."
—Hitomi Tono, Devil Summoner: Soul Hackers

The protagonist of Soul Hackers. His family consists of him, his father, mother and his sister Tomoko.

To heighten the player's experience, he is not specifically depicted in-game; however, in illustrations he is pictured as a boy with short hair wearing green clothes. In the 3DS remake, his face can now be seen on his status icon in battle (along with his other allies).

Through the tradition of Shin Megami Tensei series, he is a silent protagonist, where his personality is based upon players' actions and decisions.

The protagonist is a member of the Spookies before the game began, and meets with Hitomi at the beginning in order to hack Paradigm X. After overwriting names of several people who are joining, Kinap then sends him a warning afterwards about the authorities arriving. At Amami Float he can either fight Finnegan in a one on one fight without the aid of Nemissa or fight him with her, afterwards the Phantom Society will delete his ID so he will be unable to do anything in the city.

The original artwork of the protagonist 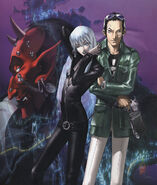 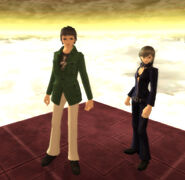 The protagonist and Nemissa's outfits in Shin Megami Tensei IMAGINE 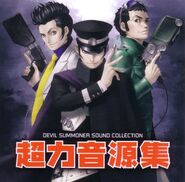 Protagonist, alongside Raidou Kuzunoha the XIV and Protagonist (Devil Summoner)