Casey Mongillo
The protagonist of Shin Megami Tensei V is a young male high school student living within the city of Tokyo.

As per Megami Tensei tradition, the protagonist's thoughts are based on dialogue choices picked by the player. The thoughts of his choices are often based around the theme of Order, Potential and Humanity, which are central to the game's major endings. Generally, it will involve either the protagonist supporting Bethel and God's order loyally, even in spite of other people's skepticism and criticism of the angels, or the protagonist will follow his own traditional ideals on justice, being indifferent towards a world.

During the beginning of the game, the protagonist is displayed to be distracted in classes, not paying attention and even falling asleep. He would make efforts to obey the rules, although those are weaker than normal: he'd try to find himself a companion as per the buddy system rule established by his school, but as he's come out empty-handed, he'd decide to leave alone. He would still be convinced to go out with his friends when they invite him however, regardless of whether he would want to or not.

Most dialogue choices usually don't directly affect the direction of the game, with the exception of a single choice, as well as a potential follow-up. The themes of Order may generally relate to the protagonist's faithful and blind obedience to Bethel as a whole, which is opposed to the choices of disinterest in Order, finding it to get in the way in following his own ideals, which instead might make him cold to others. On another hand, he might be uncertain of his ideals entirely, such as when Shohei Yakumo questions him directly what his thoughts on Order are.

Regardless of the protagonist's thoughts on Bethel, he will still work with them, and will support the side of law in their war against chaos, although in technical terms, with Hayao Koshimizu's guidance, they ignore their lack of orders to join, and enter their warzone anyway. The protagonist would be specifically aligned with Koshimizu's branch, which even cuts ties with the rest of Bethel as soon as the forces of chaos are defeated. It is only later on that the protagonist is to make a choice of which ideal he should pursue in the battle for the Throne of Creation.

The protagonist is generally selfless and is willing to help those in need; he had even risked his life protecting Tao Isonokami from a Nahobino Lahmu, even if his sacrifice was in vain. Tao would later commend him for risking his life for him, calling him a "true savior," and finds him befit to rule on the throne.

Based on his in-battle voice, it would seem that he has much energy and conviction, and perhaps even anger towards his foes. This may allude to the fact that he possesses the knowledge of Susano-o, the violent Shinto god.

In the "Return of the True Demon" DLC and subquest, the protagonist would be compared to the Demi-fiend, referred to have matching traits in their journey against defying death and the cycle of creation and destruction.

"A student whose peaceful days attending Jouin High School in Tokyo were all but shattered after being thrust helplessly into Da'at. But upon fusing with Aogami, a Proto-fiend from Bethel, he transformed into a Nahobino: a powerful being that can take on any demon."
—Lore in Shin Megami Tensei V

The protagonist is a third-year high school student at dormitory-based Jouin High School, living an ordinary life. He is friends with Yuzuru Atsuta and Tao Isonokami. It has been also implied that he knew Sahori Itsukishima.

In the midst of mysterious incidents, as per the school's established buddy system, one day while returning from school through Shinagawa Station with his friends, the station was closed because of a nearby murder, causing a traffic backup. Searching for other students, Ichiro Dazai, who wandered off in a different direction in a hunt over rumors from monster sightings, and Yuzuru, who also went to look for him, he enters the Takanawa Tunnel, which suddenly collapses on them.

Having regained consciousness, the protagonist finds himself lost in a desolated and deserted Tokyo, a mysterious world called "Da'at." Suddenly attacked by demons, while running away, a mysterious man appears before him, and lends him a hand. In the process, the protagonist fuses with him and becomes a "Nahobino," a condemned being, using this power to fight back and wander through Da'at.

Eventually, he and Yuzuru reunite, later finding Ichiro who has been put under the protection of angels, and return back to real-life Tokyo safely, where they're awaited by Tao, who informs them about the other world: in addition to their world, there is also Da'at, a collapsed Tokyo where legendary demons awaken from the darkness and take aim at Tokyo and humans. However, there is an organization that fights these demons, Bethel, with Tao and Yuzuru being veteran members, and the protagonist and Ichiro agree to join their cause to protect Tokyo.

While returning to his regular school life, demons would suddenly break out of Da'at and in the real world, and the school would suddenly be raided by demons. Lahmu, in particular, captured Sahori Itsukishima, an acquaintance of the protagonist who has been bullied, using her vulnerabilities to confuse her and get her to ally with him. Because of this, she would kill her bullies in the confusion, although she would get kidnapped by Lahmu, although she never truly wanted to get involved in any of it. The protagonist and Tao both agree to rescue Sahori and the rest of the kidnapped students.

While retrieving the kidnapped students one by one with Bethel's help, and giving them shelter over at the Fairy Village in Da'at, they would eventually receive intel about Sahori and Lahmu's whereabouts, where they confront the demon. Lahmu would merge with Sahori in the process, and although Lahmu alone has been defeated, he would successfully merge with Sahori, luring Tao in to kill her. The protagonist would stand inbetween to protect her, but he'd get himself killed in the process, leaving Tao vulnerable for the fused Lahmu to take down as well.

In her dying breath, Tao would be contacted by a higher being, reminding her of her role as a goddess, getting her back on her feet, and sacrificing her life to revive the protagonist. In spite of Lahmu's attempts to retaliate, Sahori would snap out of the fusion and gain back control of herself, leaving him exposed. The protagonist would then approach and finish Lahmu off, killing him and sacrificing Sahori in the process, to her gratitute.

The protagonist would eventually help Bethel fight off the forces of chaos and slew a majority of their leaders, such as Ishtar, Surt and Arioch. After Bethel fractures, the protagonist finds and defeats Odin, Zeus and Vasuki to create the key leading to the Empyrean, where he can decide what he wishes to do with the throne - uphold God's will, save Tokyo or destroy the throne to have humanity fend for themselves. Depending if specific criteria has been met, the protagonist may also choose to use the throne to create a world for humans only, ridding them of gods and demons alike, but not before bidding farewell to Aogami.

Artwork of the protagonist

The protagonist on the cover of the 2021/11/25* issue of Weekly Famitsu, drawn by Masayuki Doi.

Artwork of the protagonist on the release of the game

Full artwork of the protagonist on the release of the game 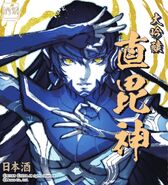 Artwork of the protagonist on the Nahobinokami

Artwork of the protagonist celebrating 1 million sales by Masayuki Doi.

The protagonist fusing with Aogami, becoming a Nahobino

The protagonist in Da'at