The protagonist is a powerful warrior who - despite his inability to wield magic - is a master swordsman, marksman and leader. He is capable of recruiting and summoning demons through his Arm Terminal. In addition, he can also wield immensely strong swords, guns and magic-effect swords by means of sword fusion.

Through the tradition of the Shin Megami Tensei series, he is a silent protagonist, where his personality is based upon players' actions and decisions. He is often looked to by the people around him for support.

In the beginning of the game, the protagonist has a dream featuring the Law Hero, Chaos Hero, heroine and Yuriko as well as an enigmatic prophecy of the future. The protagonist receives a computer program that allows him to communicate with and summon demons from Stephen, who is sending out the program to everyone he can in anticipation for the coming apocalypse. While at the mall, he witnesses a demon kill a man and is attacked by it as well. He is accused of this man's murder, and the protagonist is arrested and taken to a prison where he meets the Law Hero for the first time.

Later, he encounters the Chaos Hero at the mall and the three of them, as well as the heroine, attempt to stop an ICBM missile attack from destroying Japan. Regardless of the choices the protagonist makes, the party fails, and the Great Cataclysm occurs. The heroine stays behind, but she manages to teleport the party into the Diamond Realm before the missiles hit. He later has the choice of helping the Messians complete the Basilica and having a world of peace, helping the Gaeans destroy it and giving the world freedom or fighting both sides to make a world where there is balance and humans can decide their own fate.

Before the events of Shin Megami Tensei II, the protagonist founded the Valhalla district of Tokyo Millennium and worked to help it expand alongside Pascal-Cerberus and Madam. He refused to blindly obey the orders of the Center and was eventually killed in what was reported as an accidental cave-in. After his death, Madam took over as the governess of Valhalla and strove to continue his work.

During the game itself, a statue of the protagonist appears at the Colosseum, where it is labeled "First Champion." When seeing the statue before the first fight with Daleth, the statue will have tears flowing from its eyes for unknown reasons.

The protagonist appears in silhouette along with the Law Hero, Chaos Hero and heroine during a cutscene after completing Act 0, and is spoken of highly, regarded as a hero among heroes by the narrator. A costume was released as part of CAVE's Beta testing promotion that players can wear in order to appear as the original Super Famicom SMT hero. It is one of the few outfits in game that will actually completely overwrite a character's hair and equipment.

The Hero appears in the DLC quest "Messiahs in the Diamond Realm." At the start of the quest, Stephen appears before Nanashi, holding his formless soul as he explains that it is the soul of the hero of a timeline where he died during the ICBM attack. Nanashi goes about the Diamond Realm to gather the rest of the Messiahs; Aleph, the Demi-fiend and Flynn, before confronting Stephen again. Stephen battles Nanashi, expecting him to use his power of observation and the experience of the battle to help the hero remember who he is and assume his original form. Upon successfully reforming himself, the hero is joined by the other three Messiahs as Stephen goes all-out and challenges all the protagonists at once.

Illustration from the Kobunsha comic anthology.

The protagonist wielding the Kagutsuchi as seen in Digital Devil Apocalypse

Artwork of the protagonist and Heroine after the Great Flood

Artwork of the protagonist, Law Hero and Chaos Hero seeing the Heroine as a child

Artwork of the protagonist summoning a demon

Artwork of the protagonist and Heroine with Michael

Artwork of the protagonist with Pascal, Law Hero and Chaos Hero around a campfire 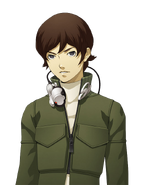 Yusuke Kitagawa as the protagonist in Persona 5: Dancing in Starlight