Majin Tensei
"There's still something that I've got to find, and I'm going to keep on searching for it... No matter how many times I must be reborn..."
—The protagonist, Bad ending

The protagonist is the main character of Majin Tensei.

Unlike the majority of Shin Megami Tensei protagonists, he is not silent. While not many details of his past are given, his late father was a computer engineer, inspiring him into the profession of computer communication, and that he was born in the district of D-03 in Neider Tokyo. At the time of the game, he is 17 years old.

Before the events of Majin Tensei, he had been using computer communication to collect information about the rumors of the demons and the damage of the earthquakes, wanting to verify if they were true. At the beginning of Majin Tensei, by chance, a mysterious person known as TAKEUCHI had sent him the Demon Summoning Program on his COMP.

In the late 1990s, ethnic battles around the world result in a large amount of deaths and a large portion of the world being closed off. Decades later, in 202X, a boy living in Neider Tokyo in the area D-03 suddenly receives a mysterious Demon Summoning Program on his COMP from someone called TAKEUCHI, with demons appearing immediately after. After clearing a demon infestation in the Sada Laboratory and freeing the people held captive, he finds a young woman in cryogenic sleep, who decides to join him out of gratitude and after realizing she has amnesia. There are three possible endings: a bad ending, a normal ending and the best ending.

Upon entering the terminal that will return them to the surface, the protagonist encounters an alternate version of himself. This alternate self confirms that the protagonist has indeed scored countless victories, even defeating Satan, but has also left behind a trail of endless corpses and criticizes the protagonist for their ideology of justice siding with the victor. The alternate self states that he has been reincarnating himself and observing countless timelines in the search for one where he is able to prevent the heroine's death, and swears he will never give up no matter how many times he must be reborn. He then bids the protagonist farewell as this timeline is not viable and continues his search.

Returning to the surface, the protagonist discovers the global wars that initiated the story's events in the first place have begun once more. Humanity is free of Satan but not of its own destructive tendencies, with ICBMs en route to Japan. The heroine, despite never recovering her memories, is at peace as she feels her entire purpose was to find the protagonist, and attempts to comfort him by saying she knows somehow this is not the end and they will meet again. The protagonist reflects on how death is the end result of every living being (humans, demons and gods) and now him, but wonders who is the one who judges life as the ICBMs land.

The protagonist and his companions find the terminal that connects the Expanse to the surface, but are unable to make it operational. The heroine, under the guise of operating the terminal's controls, begins sacrificing her life force to power the machine, stating she doesn’t care if she dies if it results in the protagonist being able to return home. Yet the protagonist is horrified by this and frantically pleads with her to stop, screaming he would rather remain in the Expanse alongside her than return to the human world alone, but his cries go unheard as she says goodbye.

Later, the protagonist awakens in the human world beside Étienne and/or Minami. The world is now at peace after the war against Satan, but the protagonist is traumatized over the heroine's death. Étienne tries to soothe the protagonist by sharing his thoughts that despite never expecting the heroine to do such a thing, he is certain she was aware of her actions and did not regret them, so the protagonist shouldn't feel regret over her death. Minami discloses that he had always objected to women fighting on the battlefield, but his perspective changed when he encountered the heroine, exclaiming her bravery and kindness was endless and that she was a true soldier. The protagonist, however, is unable to be consoled and falls into depression, questioning what his purpose now is, or what he was ever fighting for. Unable to accept the heroine's death, the protagonist begins a journey of self-discovery.

The protagonist of this ending is hinted to be the alternate self encountered in the bad ending, traveling through alternate timelines in an effort to save the heroine.

The heroine, dying in the protagonist's arms, is relieved that he is unharmed. She begins to speak about her journey with the protagonist, grateful that she was able meet him and that even after learning she was a creature of the underworld, he treated her no differently than before. She states that even though she will die, she is happy as she is able to die a human thanks to him. A hysterical protagonist refuses to acknowledge her wounds, telling her not speak like it's over as the two of them are going to return home together. Even after she silently passes away, he continues to carry her body into the terminal connecting the Expanse to the surface. Against all odds, the Morning Star begins to radiate and the machine activates.

The protagonist then awakens in the human world beside Étienne and/or Minami. Étienne is glad the protagonist is awake and apologizes for the fate of the heroine, never imagining such a thing would happen. This only makes the protagonist snap at him, saying there is no need to apologize as there was nothing that he could do. Étienne, understanding the protagonist is stricken with grief, encourages him not to let himself be lost in despair. Étienne plans to return to France in the meantime now that the world is at peace, and asks the protagonist to come with him, but realizes that he needs time to grieve first. Étienne lets the protagonist know he considers him a true friend of his, and tells him to visit him once everything has settled. Minami states that even though their mission succeeded, they have all lost far too much for the price it cost. For everyone he knew that died, he will aspire harder in reconstructing the country now that the war against Satan is over. He tells the protagonist to be strong, not only for his own sake, but also for the sake of the heroine. He suggests once they become too old to fight they should return to this location and reminisce over the past.

The protagonist swears to never fight in a battle again, and as he deletes the demon summoning program, receives a thank you message from its developer: Takeuchi. In a post-credits scene, as the dawn begins to arrive, the Morning Star starts shining and physically manifests the body of the heroine with a gentle light. The heroine, returned from the dead, is thankful she is able to see the protagonist again, and says to him that it is truly her.

In the manga, the protagonist is known as Atsuya and lives in the post-apocalyptic ruins of Nieder Tokyo. He has a younger sister, named Mio, who is abducted by demons in the beginning of the story. He frequently recalls and reflects on the memories of his sister while searching for her.

Atsuya logs onto the DDS.NET and receives a mysterious email from a figure known as Takeuchi, who warns demons are now invading Nieder Tokyo. Takeuchi has attached the demon summoning program in the hopes a savior will arise. However, Atsuya, not understanding how to operate the program, accidentally summons Orthrus and flees in terror from the computer. He then witnesses Mio being captured by a Wyvern but is unable to save her as it flies away. He goes out into the streets only to find demons are now roaming and wreaking havoc. He is almost killed by a Kobold but saved at the last minute by Orthrus.

In the second volume, Atsuya discovers a girl being experimented on in the Sada Laboratory and angrily confronts the scientist responsible. After freeing her, he introduces himself and asks if she is alright. He is then taken aback when the girl, suffering from amnesia, recalls her name as Mio, the same as his missing sister. Mio saves Atsuya's life from Minotaur by casting a Megido spell, but this leads to her being ostracized by other humans due to her ability to use magic.

Although not being seen, the protagonist, along with the heroine is mentioned by Lucifer in the Neutral route as Masakiyo Ogiwara's true parents who saved the human world during a crisis, and left their child with the Ogiwara family.

The protagonist and heroine as depicted in the guide book 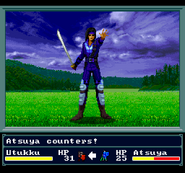 The protagonist in battle 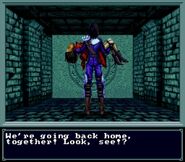 The protagonist with heroine in the true ending

Atsuya as he appears in True Remembrance

Atsuya and Mio in True Remembrance

Atsuya and Toto in True Remembrance
Community content is available under CC-BY-SA unless otherwise noted.
Advertisement