Reverse
"Even if I am to be chained to a rock, my duty is to love you and give you wisdom...
The fire I have given you is your indomitable spirit..."
—Prometheus, Persona 2: Eternal Punishment

Prometheus is a recurring demon in the series.

Prometheus was one of the Titans who sided with Zeus and his siblings in the great war against the rest of the Titans, the original rulers of the world in Greek mythology. He was very intelligent; his name means "forethought" or "foresee."

When Zeus won the war and banished Prometheus' brethren to Tartarus for eternity, Prometheus and his brother Epimethius were given the task of populating the earth with creations. Epimetheus, who created the beasts of the world, gave his creations all of the gifts that could be bestowed, leaving Prometheus with nothing to give to humanity.

To compensate, Prometheus stole fire from Mount Olympus, incurring Zeus' wrath. However, it wasn't until he taught mankind how to trick the gods that he was given his ultimate punishment. Chained to a rock for all time, his liver was eaten every day by a great eagle sent by Zeus. Immortal, he could never die and his liver would regrow.

And so he suffered, until the Greek hero Heracles freed him from his torment during the course of his famous Twelve Labors. He is often synonymous with fire and "divine knowledge."

"A Titan of Greek lore. He was very intelligent; his name means "forethought." He stole fire from Zeus and gave it to mankind. Zeus chained him to a rock as punishment and set an eagle to eat his liver every day. He was kept there until freed by Hercules."
—Shin Megami Tensei IV profile

Prometheus is a boss in the Challenge Quest, Defeat Demon In Ginza, where he has been attempting to give humans fire to strengthen them. All fail and disappear upon the flame passing through until he fights Nanashi to see if he is worthy. Upon defeat he realizes he is not only worthy but already wields the flame, deciding to leave since someone has been proven to wield such power.

Prometheus is Baofu's Ultimate Persona. He can only be summoned once his Material Card has been acquired on Mt. Iwato. In the battle against Shadow Baofu, he uses Reverse Prometheus. Even though it is not written in the status screen in the PS1 version, Prometheus is immune to Darkness.

The design of Prometheus as a Persona has large rocks attached to his bodies. These rocks represent the rock which trapped Prometheus in his originating lore. Before Kazuma Kaneko designed Prometheus for the Persona game, the rocks were more irregular. However, as Kaneko's Persona designs were based upon fashion, those rocks were alternated to resemble the gears in vanguard fashion. The red lines on the rocks represent the energy or fire stolen by Prometheus. On a side note, these concepts of the rocks and red lines reappear in the Obelisk of Shin Megami Tensei III: Nocturne.

"The Greek Titan created mankind from clay. He later stole fire from Olympus and, in turn, gave it to mankind against Zeus's will. His name is often synonymous with fire and "divine knowledge"."
—Persona 5 background

Prometheus is the ultimate Persona of Futaba Sakura. It resembles a large, floating orb that has a series of rainbow linings around it, forming a large grinning face, and is surrounded by flames. It gains the ability to detect rare items from enemies along with the abilities it inherited from Necronomicon. The animations during which Futaba uses Necronomicon, including the interior details, also remain.

"A titan in Greek mythology, his name means "foresee". The Titans were the race of giants who ruled the world before the great Olympian gods. Prometheus is well known for stealing fire from the gods and giving it to mankind."
—Shin Megami Tensei: Liberation Dx2 compendium

Prometheus as he appears in Card Summoner 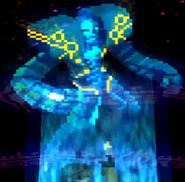 Prometheus as he appears in Persona 5

Prometheus Profile as he appears in Persona 5