Principality is a demon in the series.

A Principality (Principalities for multiple) is an angel of the Third Sphere in Christian angelology, their duty also is said to be to carry out the orders given to them by the Dominions and bequeath blessings to the material world. Their task is to oversee groups of people. As beings related to the world of the germinal ideas, they are said to inspire living things to many things such as art or science.

In the Kabbalah, they inhabit the sephirah Netzach and rule over love and beauty, with Haniel being their leader.

"The seventh class of angels. These angels protect the leaders of nations and large cities on Earth. They have an orthodox view of good and evil, but are said to be stubborn. Principalities are charged with patrolling the borders of regions overrun by demons and can create harmony between those in conflict. However, they are also the most easily corrupted of all angels.
Their spiritual awareness is three levels higher than humans. They are said to rule over time."
—Shin Megami Tensei IMAGINE compendium

Principality can be contracted in the Shinagawa field and encountered in Celu Tower instances. They appear regularly supporting various Divine and Seraph bosses. He appears frequently as an NPC supporting DB Yamaguchi.

"The seventh of the nine orders of angels. They guard cities and nations, and protect various religions."
—Shin Megami Tensei: Strange Journey compendium

Principality acts as a messenger angel for Aniel in the Challenge Quest Four Wings, Four Heads. The messenger appears after the defeat of each demon to rip the demon's head off its body for the sacrifice.

A Principality and Archangel guard an item needed to undo the first of the seals within Kanda-no-yashiro under orders from Merkabah. After warning Nanashi and Asahi to leave, they will attack should the two choose to remain. Defeating the pair will yield the Mallet Crest.

"The seventh of the nine orders of angels. They guard cities and nations, and protect various religious figures."
—Persona 5 background

Principality is the third Persona of the Justice Arcana and can only be obtained through fusion in the Velvet Room. He is the first Persona that the protagonist can use in battle that can learn Makouga, as well as the first Persona to learn Mediarama, Mabaisudi and Bless Boost. When itemized through Electric Chair execution, Principality yields a Tetraja skill card. Principality is required to perform the advanced fusion to summon Metatron, alongside Power, Dominion, Melchizedek, Sandalphon and Michael.

"Royal guardian demon who is committed to the protection of statesmen and kings."
—DemiKids Demonary

Known as Prince, he can use the wind combo attack Crosswinds with Airlok. Princes can be found in Rem blvd. and Limbo.

Principality is a common enemy appearing in the early floors of the Karma Society Tower.

"The seventh of the nine orders of angel. As the advocates of heaven, their purpose is to guard cities and nations, and watch over the leaders of state. They also fight off demons when need be."
—Shin Megami Tensei: Liberation Dx2 compendium 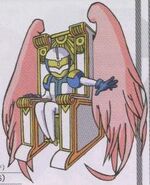 Principality as she appears in Shin Megami Tensei III: Nocturne 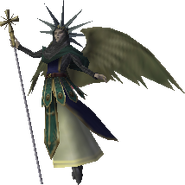 Principality in Persona O.A.
Add a photo to this gallery
Retrieved from "https://megamitensei.fandom.com/wiki/Principality?oldid=405706"
Community content is available under CC-BY-SA unless otherwise noted.