Preta, or Gaki, is a demon in the series.

Preta (प्रेत in Sanskrit, Peta in Pali, Yidak (ཡི་དྭགས་) in Tibetan, E-gui (餓鬼) in Chinese, Gaki (餓鬼) in Japanese, usually "Hungry ghost" or "Hungry Ogre" in English) is a spirit that originates from Buddhist and Hindu texts. Generally, they are the spirits of greedy, jealous or corrupted people who have become, for their negative karma, demons with an insatiable appetite for a particular substance, that can vary from corpses to anything bizarre. In some Buddhism religions, Preta is the name of one of the Six Realms that represent the Six States of Rebirth. In the Chinese traditional religion, they are beings driven by intense emotional needs in an animalistic way. In the modern Japanese language, spoiled children are called "gaki," as a reference to this demon.

Preta are described as human-like spirits that are usually invisible to the human eyes depending on their mental state. They have sunken, mummified skin, narrow limbs, an enormously distended belly and a long, thin neck; their appearance, as so, reflect their state of insatiable hunger.

In Japanese art, they are represented with bulging stomachs and small mouths and throats or as balls of smoke or fire, and are shown, usually, licking spilled water in temples, accompanied by demons that represent their agony. They dwell in the wastes and in the deserts and usually have problems while dealing with their hunger and end up becoming even more hungry: someone can eat a little, but have difficulties in finding food or drinks or have problems swallowing food; some even find that what they eat seems to burst into flames or see the food they desire vanishing before their eyes.

In Hinduism, their body is composed of air and akaash (comparable to aether, black matter or space), and since they are missing three elements (fire, water and earth), physical intake and digestion is not possible for them. They usually suffer similar conditions to those in hell, but they can freely move instead of being confined in a subterranean world.

Preta are usually not seen by humans as a nuisance unless their hunger is for blood, though in some other traditions, they prevent others from satisfying their own desire. Many times, though, they are seen as beings to be pitied and, for example, in some monasteries monks leave them some offerings before meals; some Japanese Buddhists also dedicate a day to remember them, as they believe that such offerings and remembrances will, someday, free them from their endless pain.

"Origin: Japan. The forms of greedy souls. They have large heads and a thin neck, fat bellies, and shriveled limbs. They are plagued with a hunger that can never be satisfied."
—Shin Megami Tensei A-Mode DDS dictionary

A Preta is the very first demon that the protagonist actually encounters, where he attacks a civilian in the Kichijoji Mall and then proceeds to attack the protagonist, leaving the scene after inflicting substantial damage.

This event also leads the protagonist to obtain his first weapon in the game from the dead man's body, an "Attack Knife;" and his getting wrongly arrested (the fan translation specifies that he was framed by the police for the murder) that leads to his temporary incarceration and meeting the other main characters.

A Preta is fought at the end of Chapter 1. This is the first battle where the player can give orders.

Gaki is faced as a boss in the tutorial maze. He is far higher leveled than in other games (level 16) and is used to explain Elemental-Based combat.

"They are 'hungry ghosts' as they are unable to swallow food. This is a punishment in reincarnation. One with too many desires in life is doomed to spend time as a Preta."
—Shin Megami Tensei III: Nocturne profile

A team of three Pretas is fought in the Shinjuku Medical Center in order to retrieve an Annex Pass in order to exit the facility. They can also be found in Shibuya, Ginza and Kabukicho Prison.

Pretas are also kept by the Mantra Army to dispose of the bodies of those who lose in their trials.

Additionally, in the Labyrinth of Amala's Third Kalpa, there is a Shady Broker that sells a Preta with Almighty skills for 150,000 Macca behind a door that only opens to a demon of darkness. As such, the Demi-fiend must have a dark-aligned title before he can attempt to purchase this Preta.

"The form given to those who are cast down into the Preta Realm, one of the Six Realms of Buddhist scriptures.
Those who lived extravagant lives are said to be cast into the Preta Realm after death. Preta are constantly tormented by hunger and thirst, but whenever they put something to their mouths, it bursts into flame, and so they are eternally deprived of food and drink. Their figures are gaunt, except for their bellies which are strangely swollen."
—Shin Megami Tensei IMAGINE compendium

Gaki can be contracted in Ueno, Suginami, Shinjuku Babel's docks area, Old Tokyo Metro, and the bronze level of Ichigaya Camp. It appears regularly as a tutorial boss and an enemy mob in Virtual Battle, Kuchinawa Cave, the Ichigaya Gold boss room, and some rooms in the Second Home instance. It also plays a central role in the Superficial Contract quest.

"A ghoulish demon of Buddhist lore. Greedy humans cast into the Preta realm of Hell become these. Their hunger is unrelenting and their suffering continues until they are reincarnated."
—Shin Megami Tensei: Strange Journey compendium

As an enemy, Preta sports the Macca Beam skill, which reduces the protagonist's total Macca by 20%.

"Known as gaki in Japanese, they are ghoulish demons of Buddhist lore. Greedy humans cast into the preta realm become these. Their hunger is unrelenting and their suffering continues until they are reincarnated."
—Shin Megami Tensei IV profile

Preta can be found in Ueno. It can teach Flynn the Life Drain and Bad Company skills through its Demon Whisper. Preta is one of the demons needed to summon Kanbari through special fusion.

"Known as gaki in Japanese, they are ghoulish demons of Buddhist lore. Greedy humans cast into the preta realm become these. Their hunger is unrelenting and their suffering continues until they are reincarnated."
—Shin Megami Tensei IV Apocalypse profile

A Preta is responsible for instigating the events of King Frost taking over the spring in the Fairy Forest and trying to get the fairies to find the "treasure" hidden in the forest. After their idea of having a Jack Frost find the treasure failed, it reveals that it was ordered to find the treasure in the forest by some creepy god from the Divine Powers when questioned by Nozomi. Afterward, it runs off, fearing for its life.

Preta can be found within Kanda-no-yashiro. It can teach the Life Drain, Bad Company, Mudo and Mabufu skills through Demon Whisper. Preta receives a bonus to Darkness, Ice and ailment skills learned.

"Known as "gaki" in Japanese, they are ghoulish demons of Buddhist lore.
Greedy humans cast into the preta realm become these. Their hunger is unrelenting and their suffering continues until they are reincarnated."
—Shin Megami Tensei V lore

"Known as Gaki in Japanese, they are ghoulish demons of Buddhist lore. Greedy humans cast into the Preta realm become these unfortunate creatures. Any food they try to consume burns up in their mouth, fated to be tormented by never ending hunger and thirst."
—Shin Megami Tensei: Liberation Dx2 compendium 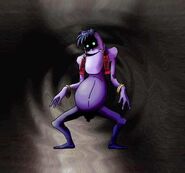 Gaki as it appears in Shin Megami Tensei: Devil Summoner.

Preta as it appears in Shin Megami Tensei III: Nocturne.

Preta as it appears in Shin Megami Tensei IMAGINE.

Preta as it appears in Raidou Kuzunoha vs. The Lone Marebito.