Poltergeist is a demon in the series.

Poltergeist, in German meaning "noisy ghost," is an unique type of ghost that enjoys causing mischief and terrorizing the living. They seek recognition and attention, and will do anything to receive it, even if they are violent and deadly methods. The best defining mark of a poltergeist is any manipulation of the physical environment, such as the movement of objects, physical attacks, spontaneous combustion and so forth. They lift and move objects around and make loud and unexplainable noises.

Much of the time, the poltergeist phenomenon is incorrectly credited to mischievous spirits, ghosts or extremely negative entities. However, more modern scientific studies reveal convincing arguments that poltergeists are associated with psychokinesis.

A common factor of classic poltergeist activity is the presence of an adolescent, usually female, in the household or for all of the activity to be centered around one specific person. It's not uncommon for the activity to not take place unless that person is present at the time. In most cases, when that specific person is removed from the location, the events cease.

They are often associated with paranormal activity, and, rarely, demonic possession.

"An apparition from German folk tales that is attached to a certain building and causes furniture and household objects to float around. Its name means "noisy ghost" or "noise-making monster" in German.
Today, the poltergeist phenomenon has been scientifically analyzed, and many theories have been proposed, but so far they have failed to produce a definitive explanation."
—Shin Megami Tensei IMAGINE compendium

"A trickster ghost known for haunting houses.
It can do various things, from pulling harmless pranks like making loud noises and moving objects through the air, to dangerous, destructive acts, like starting fires and assaulting people. Poltergeist incidents often occur in homes with children or teenagers, and one theory states that the cause is a child's unstable mentality."
—Shin Megami Tensei IV profile

Poltergeist can be found in Ueno. It can teach Flynn the Sukunda and Needle Shot skills through its Demon Whisper. Poltergeist can evolve into Quicksilver upon reaching level 17.

Poltergeist can be found in the Toyosu Shelter and the Konganji Passage in Ginza. It can teach the Sukunda, Tathlum Shot and Rapid Needle skills through its Demon Whisper. Poltergeist benefits from learning Gun, ailment and support skills. Poltergeist can evolve into Quicksilver at level 23.

Poltergeist is one of the few demons that can be recruited in battle without negotiation (the first time) if save data is imported from Raidou Kuzunoha vs. The Soulless Army.

Any time a Persona has a "Change Form" mutation, there is a chance the mutation can fail, changing the Persona into Poltergeist rather than its usual mutation result. For this reason, the player should always keep a Poltergeist in the Velvet Room stock.

Poltergeist begin appearing the Temple of Nightmare area. They teleport away from players until they can be trapped in a dead end. When killed, they drop an item to extend the level's time limit.

"A trickster ghost known for haunting houses.
It wreaks havoc by making loud noises and moving objects around though the air."
—Devil Survivor 2 compendium

In the first day, Poltergeist appears from Daichi Shijima's cell phone out of the blue and cast the Bufu spell on other malignant demons to help him to get out of the crumbled subway station safely. In the third day, Daichi summons Poltergeist to extinguish the fire set by the horde of Legions. Though, Poltergeist in the game does not learn the ice spell by itself. Instead, it can only use the basic fire spell if without fusion.

Poltergeist appears in Illusory Shibuya and Illusory 106, behind barriers that can only be broken by Itsuki's Radiant Unity skill, Ray of Light. It has 154 attack and 42 armor. When defeated, it may drop the Performa materials Poltergeist Force and Unruly Ectoplasm.

Poltergeist as it appears in Shin Megami Tensei IMAGINE

Poltergeist in Devil Summoner: Raidou Kuzunoha vs. The Soulless Army. 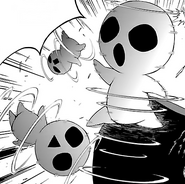 Poltergeist as it appears in Raidou Kuzunoha vs. the Lone Marebito manga

Poltergeist as it appears in Jack Bros. 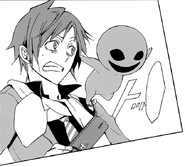 Poltergeist as it appears in Devil Survivor 2 The Animation