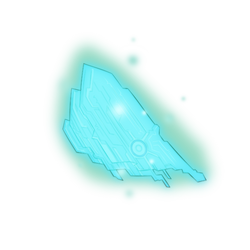 Plumes of Dusk (黄昏の羽根, Tasogare no hane)? are a key item in the Persona series.

Plume of Dusk are crystalline substances named after their aesthetic similarity to feathers. They are noted to be vital, "similar to a living thing, yet different" as well as said to "exist in a state between mind and matter, mass and information", a description harkening back to that of the Velvet Room.

The Plume of Dusk is an item that miraculously revives the protagonist and his party to full HP and SP upon his death. The player starts with ten Plumes when starting easy mode or thirty Plumes in beginner mode (Persona 3 Portable), though another can be gained through one of Elizabeth's requests in Persona 3 FES.

The Kirijo Group's Shadow Research began when Kouetsu Kirijo came into possession of one of these Plumes. Through researching it, they learned of the existence of Nyx, which led Kouetsu Kirijo and other researchers to become obsessed with the idea of The Fall and how to artificially facilitate it.

It is revealed that the Plumes of Dusk are primarily used in the cores of the personality modules of the robotic Anti-Shadow Suppression Weapons in order to grant an awareness from which they can summon a Persona. Earlier models such as those in the twenties and below (such as Unit #024) had lesser sized Plumes of Dusk while later models, like Labrys, had full-sized Plumes of Dusk.[1] Due to having full-sized Plumes of Dusk, it is speculated by the scientists in the intro of Labrys' story that such robots will develop their personalities faster when Labrys speaks in an accent immediately upon awakening.

Sho Minazuki has a Plume of Dusk implanted in him, which was put there by Shuji Ikutsuki in order to have him develop a Persona in his experiments on the boy. Sho failed to develop one, however, and a new entity was born within him. This entity came to be known as Minazuki and considered his existence one that will protect and do anything Sho wishes. Minazuki understood that it was born from death. In the ending, the Plume of Dusk passes on Minazuki's Persona Tsukiyomi to Sho after he disappears and from that point on his eyes and scar glow blue.

Retrieved from "https://megamitensei.fandom.com/wiki/Plume_of_Dusk?oldid=359918"
Community content is available under CC-BY-SA unless otherwise noted.