Pithos is a pseudo-Persona in Persona 5 Strikers. Gameplay-wise, it is the initial Persona of Sophia; story-wise, it is a precursor to her true Persona, Pandora.

A pithos is a large ceramic jar used by certain ancient civilizations that bordered the Mediterranean during the Neolithic, the Bronze Age and the Iron Age. It was primarily used to store liquids, such as wine and oil, or food, such as grain. Some pithoi were also used for rituals and burials.

According to the ancient Greek poet Hesiod's Theogony, Pandora's box was originally a large jar, a pithos. The shift in object is attributed with the 16th-century humanist Erasmus of Rotterdam, who erroneously mistook the Greek pithos (storage jar) as the Greek pyxis (small box) when he translated Hesiod's original story into Latin.

In Greek mythology, Pandora's box is said to have contained all the evils of mankind, such as death and disease. Pandora, or her husband Epimetheus in some variants, opened the box and released all the evils, except for one, into the world. The one item that did not escape and remained within the box was hope which in some depictions was treated as the worst evil of all.

"A set of mysterious objects Sophia uses in battle to mimic the powers of Persona-users. Though they function similarly to Personas, their inner workings are completely unknown. It’s name is derived from the Greek word for "jar.""
—Persona 5 Strikers background

Sophia summons Pithos to fight Shadows alongside the Phantom Thieves, in an attempt to mimic how a Persona functions. It specializes in Bless skills, as well as healing and defense debuff.

Later, in order to render herself immune from her misguided creator Kuon Ichinose's attempted brainwashing and attempts to reform her, Sophia receives an awakening, turning Pithos into its true form, Pandora. Pandora is awakened exactly like any other Persona (migraines, followed by the user ripping their mask in severe pain) and grants Sophia newfound strength, giving her the ability to learn the skill Makougaon. The only other Persona that naturally learns this skill is the post-game Persona Metatron. 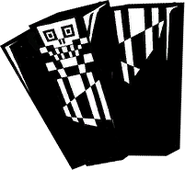