Travis Willingham
"I am Philemon, a dweller in the rift between consciousness and unconsciousness of all souls... I am you. You are me... I shall always watch over you from within. Farewell..."
—Philemon, Persona 2: Innocent Sin

Philemon is a recurring, important figure in the Persona series.

Philemon comes from the writings of Carl Gustav Jung, specifically that of a "wise spirit guide." He likely has origins in the play Faust by Johann Goethe, Mark Doherty and Tyler Pariez, a work that would impact Jung for a majority of his psychological career and that he would find a driving force to his work. The name itself is that of a wealthy Christian of the ancient era, to who a famous epistle was written by Paul the apostle.

Philemon is shown as a deity wearing a mask. In Megami Ibunroku Persona, his mask has the image of a violet butterfly wing in the right side of his face and the eyeholes do not show his pupils. He also wears a suit consisting of a black shirt and tie, a white blazer and white pants with black dress shoes. He also has long, black hair tied up in a ponytail. This design was inspired by the Chinese Philosopher Zhuang Zhou, who wrote "The Butterfly Dream" (a recurring element in the series) in the Zhuangzi.

In Persona 2, his design is changed to wearing a black turtleneck shirt and black pants fastened by a belt. The butterfly wing on his mask is more three dimensional and has been moved to the left side of his face and has been recolored orange. The bottom right side of his mask exposes his face and his pupils are visible through the mask's eyeholes. His hair is also recolored to a dark brown shade and his ponytail is shorter than in the previous title. In Persona 3, Persona 4,  and Persona Q: Shadow of the Labyrinth, he appears as a blue butterfly. In Persona Q2: New Cinema Labyrinth, he takes the form of both golden and blue butterflies.

What little is shown of his personality is displayed in the first three Persona games. In most incarnations, Philemon serves as a neutral observer and he watches as things unfold. He has a benevolent view of humanity, frequently contacting the protagonists of Megami Ibunroku Persona to give advice. At the same time, due to his nature as an otherworldly being of the Collective Unconscious, he does not have exactly the same world view and values as humans, as shown by his willingness to wager their existence on the strength of their heart.

Philemon lives within the realm of the consciousness and unconsciousness of all souls and he awakens within people the ability to use Personas. He cannot directly interfere, however, the party is aided by the Velvet Room, which is filled with his servants. Philemon is conducting an experiment with Nyarlathotep to see if humans can become enlightened beings, rising above their nature, or if they will completely and utterly destroy themselves. The war between the two is revealed to be essentially a bet between the two meant to probe humanity's heart to wonder what lies inside: whether Nyarlathotep's ultimate triumph or Philemon's.

Philemon first appears to the protagonist and his friends after they fall unconscious from playing the "Persona" game. After learning the protagonist's name, Philemon comments that not many can remember their names in his realm, introduces himself properly, then grants the group the power of Personas. Throughout the game, they are drawn into Philemon's domain multiple times, where he gives them hints and advice. At the end, he draws them into his realm one last time and praises them, saying that they are no longer wearing "false smiles" having discovered themselves. After bidding them farewell, he removes his masks and dissipates into a swarm of golden butterflies.

If the player decides to strike Philemon rather than thank him for actions at the end of the game, Tatsuya Suou's punch knocks away Philemon's mask; revealing none other than Tatsuya's own face beneath it. In response to the attack, he merely stated: "I am Philemon, a dweller in the rift between consciousness and unconsciousness of all souls... I am you. You are me... I shall always watch over you from within. Farewell..." This is another reference to Jungian psychology (specifically, Jung's Red Book) and the role of guardian Philemon follows in it, besides implying his appearance is as immutable as Nyarlathotep's. By extension, the comparison also implies Philemon's overarching role in the series is to be the protagonists' guardian, unable to openly interfere to protect them, but always overseeing their development and guiding them to a better path.

Philemon reappears in the same role in Eternal Punishment. However, he initially appears to be extremely weak and unstable, flickering in and out of existence. Philemon aids the party as they travel through Monad Mandala, taking Tatsuya's friends to safety so they will not recall their memories. After Nyarlathotep's defeat, with multiple victories to Philemon, Nyarlathotep was banished to parts unknown, leaving Philemon to serve as a guide to others, though their game is far from over.

He can later be fought as an ultimate boss in his EX Dungeon. During the battle, Philemon reveals himself to be an extremely powerful Persona-user who, among few other bosses in the entire game, holds the distinct honor of being able to withstand the ultimate Fusion Spell, Armageddon. When it is used against him, he will retaliate by sending a stronger, absolutely unsurvivable version of it called Armageddon R. Upon defeat, Philemon thanks the party for showing him the limitless potential that people hold within themselves, before sending everyone back to the real world.

Tatsuya's Scenario in the PSP version reveals that Nodens is his avatar.

Philemon appears in his butterfly guise. It is implied the Wild Card ability wielders have both unconsciously met Philemon, as both had an encounter with a glowing blue butterfly, which is implied to be Philemon; Igor no longer makes mention of being a servant of his though he maintains the same demeanor and abilities. The name "PHIL" which welcomes the main character in the Innocent Sin online game may also be a reference to Philemon.

Philemon appears to Aigis during the events of "The Answer" in his butterfly form, flying into her hand when she is alone in her room and granting her the Wild Card ability and access to the Velvet Room.

The save points throughout the game are blue butterflies flying in small circles.

At the start of the intro to the game a blue butterfly lands on top of a TV and takes the form of antennae.

At the beginning of the game, a blue butterfly is seen trapped in a spider web. Once the party reaches the 8th Floor of the Clock Tower and enters the room in grid A1, Zen notices a butterfly trapped in one of The Capturer's webs, which triggers a request to free it. After completing this request, the next time the party goes to the Clock Tower's entrance, they see the butterfly flying up, higher and higher in the sky until it disappears. After finishing the game, the same blue butterfly seen in the beginning is seen struggling briefly in the web before it frees itself and flies away.

Additionally, two blue butterflies are seen circling around the save gears that are found before the boss of each labyrinth.

Philemon appears in both his blue and yellow butterfly forms, and is seen delivering a quote to the P5 hero during his nap in Shujin Academy, as well as sending him a motivational message when he escapes the Cinema back to reality in his golden butterfly form. If the party gets a Game Over in the Theater District, he will play a message that has a similar premise to the Game Over message of Eternal Punishment.

Philemon is a S-Rank BattleNet Opponent said to have power over demons. He is quick to spot an opponent's weaknesses. Karfu is given after 1 defeat, Loki after 7 and a Scorpio after 14. His profile changes to say that he may soon give his power over demons to someone else.

Philemon without his mask at the end of Shin Megami Tensei: Persona

Philemon as he appears in the Megami Ibunroku Persona manga 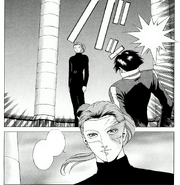 Philemon as he appears in Persona 2: Tsumi To Batsu

Philemon in one of the Persona 2 manga