Persona Q: Shadow of the Labyrinth is an RPG for the Nintendo 3DS in the vein of the Etrian Odyssey series headed by the director of Etrian Odyssey IV, Daisuke Kaneda. It crosses the cast of Persona 4 once again with the characters of Persona 3. The main theme for the game is Maze of Life.

"On a normal, uneventful day, a bell suddenly rings with an eerie sound.
The sound led 18 Persona-users to a certain school.
There, they were greeted by a never-ending festival...
In the midst of the students enjoying the festival were Shadows, creatures which feed upon people's psyches. And there seems to be no exit from the school...
The trapped Persona-users meet Zen and Rei, students who have lost their memories. As they decide to work together to escape this world, a mysterious figure lurks...
The casts of Persona 3 and Persona 4 have transcended time and space to meet. Can they solve the mysteries of this world and return to their own...?"

The story of Persona Q: Shadow of the Labyrinth revolves around a rumor that involves the so-called "Seven Wonders of Yasogami High," a mysterious clock tower, and a labyrinth that appears out of nowhere on the school grounds, during the Yasogami Culture Festival. According to said rumors, whoever hears the sound of the tower's bell will die. The bell's chime is also heard in Tartarus by the members of SEES, who find themselves transported to Yasogami High. The only way to return the world to its original state seems to be hidden within Zen and Rei. However, both of them have lost their memories.

The story is set during the typhoon which had the Cultural Festival of Gekkoukan High cancelled.

After two days of being bedridden due to a cold, the P3 Hero decides to head out to Tartarus with his team. Everyone is gathered in front of its entrance while they wait for him finish his visit at the Velvet room. At that time, Fuuka notices a spider, but quickly brushes it off as her imagination.

Back in the Velvet Room, the P3 Hero is speaking with Elizabeth who notes that her Master is not present. She says that the only Persona she can fuse at the moment is Legion. Theodore appears to bring assistance, also refuting that Elizabeth's statement is not true, and that she can in fact fuse other Personas. Suddenly, the Velvet Room blacks out, and when the light returns, everyone in SEES is already inside causing confusion amongst them. The Velvet Room (which is an elevator) then falls. Upon stopping, the group steps out only to be greeted by what appears to be a Cultural Festival. They immediately split up to investigate the area, learning that there seems to be no exit, and that the school is called Yasogami High. There is one area they haven't explored, however, as it contains Shadows within -- an attraction called You in Wonderland.

As they were about to enter, two students -- Rei and Zen appear, and tell them not to go in as it is dangerous. They reassure the two that they are capable to protecting themselves and invites them to tag along and escape the area...

Set during the Yasogami High School culture festival shortly following the cross-dressing pageant, the P4 Hero meets Margaret at school. She invites him and his friends into the long-nosed fortune teller's booth only for them to find it opens into a platform connected by three broken stairs. When they attempt to leave the booth, Naoto Shirogane notices the school now has a large clock tower outside -- something Yukiko Amagi claims has not existed at Yasogami High since when she was an elementary student. While looking for a booth, they come across one that was not on the program -- a door marked You in Wonderland -- where they discover they can summon their Personas outside of the television and find Shadows inhabiting the area.

It is eventually revealed that the world that they are being held in was created by Zen, actually a part of Chronos. Twelve years ago, when he came to guide the soul of a girl, Niko, who had just passed away, he was intrigued by her despair and first created the world in order to get her to speak, and then, wanting to save her, wiped her and his own memories, also giving the two of them new names in the process. The characters of Persona 3 and 4 restore Zen and Rei's memories and awaken the remaining part of Chronos that wants to fulfill its duty, and together with Zen defeat it. Rei reconciles with Zen and the others, realizing that her life had meaning, especially to her new friends throughout their adventures. Finally at peace, Rei and Zen depart into the afterlife together while the characters of Persona 3 and 4 return to their respective times and move on, albeit with no memory of the adventure.

The gameplay of this title is deeply grounded in its Etrian Odyssey roots: Players explore a seemingly endless labyrinth in a first person perspective and battle Shadows in a turn-based fashion similar to Persona 3 and Persona 4. Players can compose teams of five from the twenty playable characters and dialogue will change according to the party's composition. The new characters Zen and Rei will function as a singular unit, with Rei focusing on healing skills and Zen using physical attacks. The twenty playable characters do not include support characters like Fuuka Yamagishi and Rise Kujikawa, who can be picked for the role and have support skills of their own. Party members and support characters can be swapped out as needed during the game. Unlike their originating games, the game will not end when either protagonist loses all their health, unless the player is playing on the Risky difficulty.

Unlike the previous games, all party members (not just the protagonists) are able to use a variety of Sub-Personas, which are explained in the story as having to do with the meeting of the two protagonists. These Sub-Personas can be assigned to other characters and can be obtained as rewards for winning battles. They boost HP and MP and also grant a set of added abilities. Thus, the Sub-Persona system is designed to allow players to use characters they like even if they share similar focuses by giving players the option to diversify their skill sets.

Shadow of the Labyrinth also introduces a Boost meter mechanic, which is built up by exploiting enemy weaknesses or dealing critical damage. When the character deals weakness or critical damage, it grants that character the Boost status, which has multiple functions: skills performed during Boost status have no HP or SP cost, characters who began the turn Boosted have a small chance of initiating a Co-Op attack, and if multiple characters are Boosted at the end of the turn there is a chance of initiating an All-Out Attack, with the chance increasing with each Boosted character. Boost status wears off if the character takes a hit or when they take an action that does not score a critical or weakness hit. Unlike the Smirk status of Shin Megami Tensei IV, Boost status only benefits the player characters and can be sustained infinitely if the Boosted character deals consistent criticals/weakness hits and is not hit by any attacks.

Like Etrian Odyssey, players must make their own maps in Persona Q. Certain chests are unlocked by mapping out a dungeon's floor and stepping on every tile, although those chests can also be unlocked by spending 3DS Play Coins at a rate of 3 play coins for every percentage point left unexplored. If the player choses to spend Play Coins to open a Map Chest, they must be spent again on the next cycle if the player still has not completed that map. 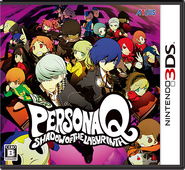 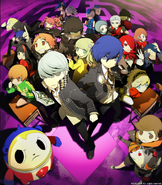 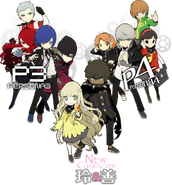 The cast of the game 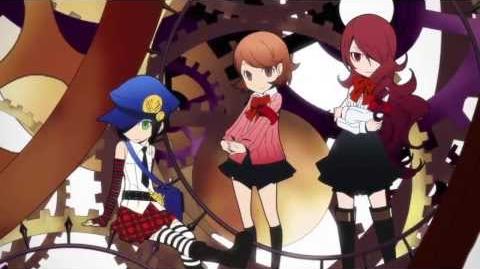