Ain Soph, named after the Hebrew word for "infinity," was based on Persona 3. It was announced and released immediately after the closing of Atlus' previous browser-based game Persona 3: The Night Before and it inherited some parts of the previous game's design, but with a new setting and story. Within the game, the player encounters Igor in the Velvet Room, where they learn of a nightmare world called Qliphoth (クリフォト). The player is told they have awakened to the power of the Persona in order to understand the mystery of this world and eventually escape it.

Every action within the game accumulates fatigue. Once a player has reached maximum fatigue they are no longer able to play until the server resets the next day. Players are able to prepare for dungeons by buying items and fusing Personas. Unlike its predecessor, the enemies were mostly based off of Kazuma Kaneko's designs such as Spartoi and Kugutsu. By defeating enemies players can obtain experience, money and fame, as well as access to higher floors. In losing battles, players gain a great amount of fatigue and lose fame points.

The player can choose one of 4 starter Personas based on four traits: 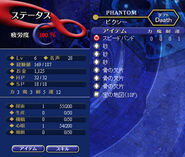 Igor in the game. 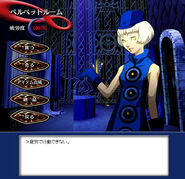 Elizabeth in the game.
Community content is available under CC-BY-SA unless otherwise noted.
Advertisement